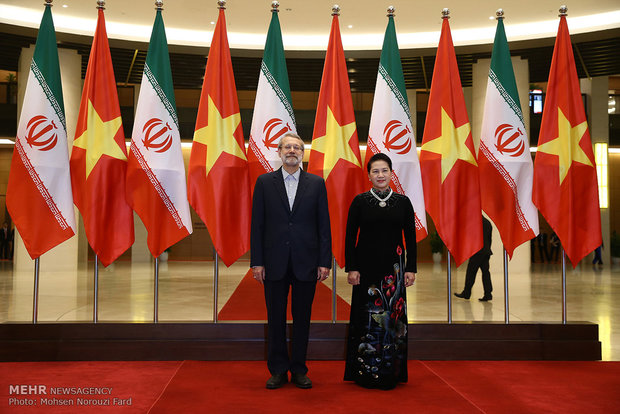 Ali Larijani, the Speaker of Iranian Parliament, said on Monday that Americans have been paving the ground for terrorist groups to flourish wherever Americans have made a military intervention.

“This is an experience that wherever Americans have made military intervention the place have turned into a birthplace for terrorist activities; in fact, Americans are practically creating and spreading terrorism,” said Ali Larijani, the Speaker of Iranian Parliament, on Monday, in Hanoi.

The Iranian top lawmaker made the remarks in a meeting with his Vietnamese counterpart the Chairwoman of Vietnamese National Assembly (NA) Nguyen Thi Kim Ngan.

Paying tribute to Vietnam's leader, Ho Chi Minh, Larijani said that he was a leader with ordinary life-style.

“The Iranian nation always puts the name of Vietnam next to glory and pride and in a visit to the mausoleum of Ho Chi Minh, his living place proved that he was a popular leader. If Vietnamese MP visit Iran in the future, they will see that Imam Khomeini’s home also was a simple and ordinary place,” said Mr. Larijani.

“The Iranian Parliament is eager to expand bilateral parliamentary relations with Vietnam at all levels and there are good grounds for cooperation,” added the Iranian top MP referring to what he called closeness between Iran and Vietnam which has made the two parliaments closer.

“Vietnam enjoys good potentials and these capacities can be utilized to expand trade relations between the two countries as the joint commission of the two countries have brokered MoUs in diverse areas,” he articulated.

Aslo in this meeting, Nguyen Thi Kim Ngan, for her part, briefed the Iranian speaker of the economic status and growth in Vietnam.

“We appreciate the situation Iran is locate in, with a disturbed region and some sanctions in place, and we are willing to cooperate with Iran,” she highlighted.