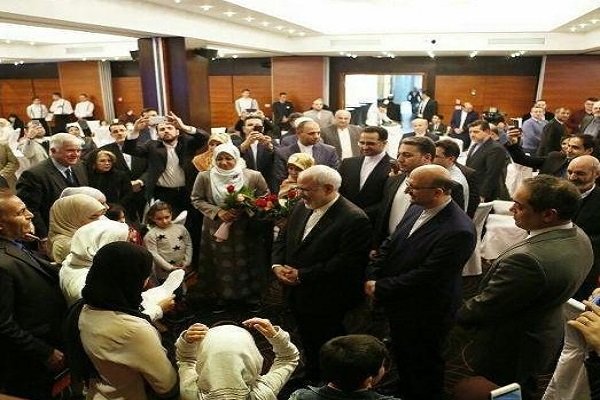 In a meeting with Iranians living in Bosnia and Herzegovina, the Iranian foreign minister urges Muslims to repel extremism, adding extremists are not Muslim.
“I remember more than 24 years ago, when I was honored to visit Sarajevo in the final days of the Bosnian War, I saw a war-torn city that had seen and resisted violence and mass killing. Today, I am happy to see that Sarajevo has passed that bitter legacy of war and entered the stage of construction and a peaceful life,” Iranian foreign minister Mohammad Javad Zarif said in a meeting with Iranians living in Bosnia and Herzegovina on Thursday evening.
He went on to hope that there will be no more wars anywhere in the world, adding that wherever there is a war, the parties can find a political solution as soon as possible.
"We are honored that we stood alongside Bosnia during the hard time,” Iran’s foreign minister said, adding that Iran will continue to stay with the people of Bosnia.
Referring to the newly emerged danger of terrorism in the West Asia region, Zarif said "we are facing a new danger in the region today, and that is the danger of extremism,” adding that extremism has no place in Islam.
The foreign minister emphasized "we do not allow ourselves to call the extremists in 1990’s Christian, as we do not call the extremists in the Middle East today Muslim either.’
At the end of his remarks, Zarif said that ISIL extremism and the current terrorism in the Middle East have nothing to do with Islam, warning that the terrorism is not finished in the region yet.