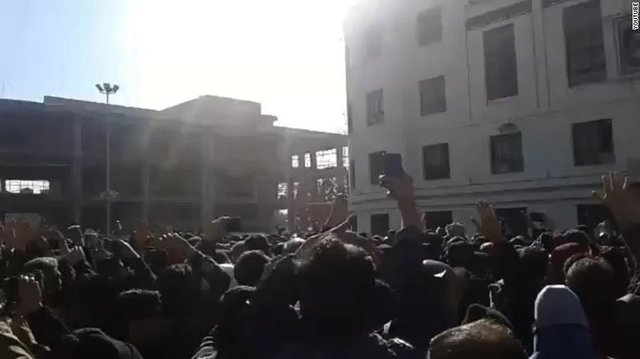 Sources close to security bodies have said of over 500 people arrested during the disturbances in different cities in Iran, more than 80 percent have admitted receiving money and ordered from outside the country to misuse the people’s protest against price rises and high unemployment.

This comes against the backdrop of a declared scheme by Saudi Crown Prince Mohammad bin Salman to bring unrest to the streets of Iran. The plot seems to have untraveled in the form of sporadic feats of sabotage by relatively professional men during the public protests over the last few days.

The premonition for this also came back in October by U.S. Secretary of State Rex Tillerson who said Washington would seek regime change in Iran.

A recent anti-Iran plan by Saudis, Zionists, and the U.S. was put to force by funding the terrorist expatriate group Mujahedin-e Khalq Organization (MKO) to seize the moment and wreak chaos.

Alaeddin Boroujerdi, chairman of the Majlis National Security and Foreign Policy Committee, said on Sunday that “enemies of the revolution have provoked the people and instigated the recent unrest”.

The senior MP expressed hope that the government would meet the people’s demands to prevent any abuse by anti-establishment elements.

Maryam Rajavi, the MKO terrorist leader, has urged more violence and chaos in a twitter message.

State Department spokesperson Heather Nauert has tweeted, “Secretary Tillerson reiterates the United States’ deep respect for the Iranian people. We call on all nations to stand with us in demanding the regime respect their basic human rights.”

However, Interior Minister Abdolreza Rahmani Fazli said on Sunday that Iran trusts “power of the system” and “vigilance of the people” to prevent the misuse of the situation by the ill-wishers.

“Our tolerance comes from our trust on the power of the system and vigilance of the people. There are legal ways and no problem can be solved in chaos,” the minister said during a meeting of the supreme council of provinces.

Groups of protesters held rallies in several cities, including Tehran, Arak, Kermanshah, Khoramabad, on Thursday and Friday to voice their anger over the rising prices and unemployment.

Rahmani Fazli said, “We should talk to the people and there is no way but the people’s involvement in solving the problems.”

The interior minister also said if people want their living conditions to improve they will not be realized through violence and disorder.

Mohammad Hossein Moghimi, Tehran’s governor, told ISNA on Sunday that all the rallies are “illegal”, because no permission has been issued in this respect.

Meanwhile, Hossein Naghavi Hosseini, the spokesman for the Majlis National Security and Foreign Policy Committee, has called on the Interior Ministry to specify certain places for the people to hold peaceful demonstrations.

First Vice President Es’haq Jahangiri said on Saturday that the government will work to solve economic problems and price hikes.

According to Press TV, he said that “the prices of several commodities may have seen a rise due to some incidents, and each case has its own reason”, adding that the government is duty-bound to revise them.

The parliament security committee plans to hold an emergency meeting on Monday to assess the situation, Kamal Dehghani Firouzabadi, the committee’s deputy chairman, said on Sunday.

Mohammad Reza Aref, chairman of the pro-reform Hope faction in the parliament, said on Sunday that the “ill-wishers” seek to poison the atmosphere and kill the people’s hope.

Habibollah Asgaroladi, the president of the Iran-China Chamber of Commerce, said that the people’s protests have economic roots, however, the foreign elements link political issues to economic ones.

“Economic problems of the people who defend the Islamic revolution with all power should be solved,” he noted.

Moshen Hashemi, the chairman of the Tehran city council, said that protest should be expressed within the framework of law.

He attached importance to maintaining unity.

Hamidreza Jalayeepour, a professor of sociology at Tehran University, told IRNA that reformists “loudly” announce that they are “fiercely” against provoking unrest by MKO and monarchists who wish an overthrow of the Islamic Republic system.

Seyyed Reza Taqavi, a principlist cleric, said the Iranian nation have repeatedly proved that it has the “power to counter the greatest challenges”.

Ali Motahari, a vocal principlist lawmaker, said it is necessary to respect the rights of people for “civil protest” but those who do sabotage acts should be dealt with.