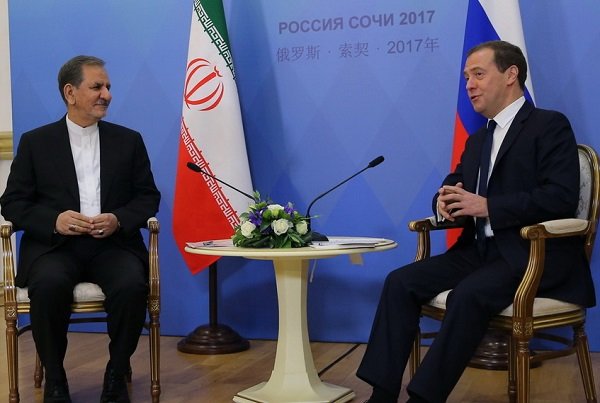 Iran’s 1st VP Jahangiri said cooperation between Iran and Russia in the fight against terrorism remained a successful model in the world.

Iranian Vice-President Es’hagh Jahangiri, who is Sochi to take part in the 16th meeting of the Council of Heads of Government of the Shanghai Cooperation Organization (SCO), met and talked with Prime Minister of Russia Dmitry Medvedev in the Olympic Park of the Russian city.

Referring to frequent meetings of the two countries’ presidents over the past two years, Jahangiri said Vladimir Putin’s last-month visit to Tehran was positive and constructive and will hopefully lead to fruitful outcomes for expansion of economic relations between the two sides.

Iran’s 1st VP rejoiced to note that volume of Iran-Russia trade turnover had increased significantly in 2016 and the first half of 2017; “economic capacities of the two countries could further boost existing trade transactions.”

He also touched upon the recent trilateral meeting between Iran, Russia and Turkey in Sochi expressing hope that outcomes of dialogues will benefit regional nations.

“Following JCPOA implementation, banking relations between Tehran and Moscow have improved though both sides are seeking to conduct trade transactions through local currencies,” he added.

At the end of his remarks, the Iranian official emphasized the need for development of cooperation in various fields including oil and gas arenas adding “Iran welcomed presence and investment of Russian oil giants and is ready to launch joint venture with Russia in various sectors like pharmaceuticals.”

The Russian PM Dmitry Medvedev, for his part, stressed the need for reinvigoration of ties and elevation of cooperation between the two countries. He also voiced willingness of major Russian companies to make investments in Iran.

Medvedev expressed optimism towards future of Tehran-Moscow relations and stated that bolstering existing ties in various arenas could lift up bilateral economic transactions.

He further said no effort will be spared to pave the path for Iran to join the Shanghai Cooperation Organization (SCO) as no barrier exists to Iran’s membership.

Prior to the meeting, Iran’s Es’hagh Jahangir paid visit to athletic facilities of Sochi Olympic Park which was constructed for the 2014 Winter Olympics and 2014 Winter Paralympics.