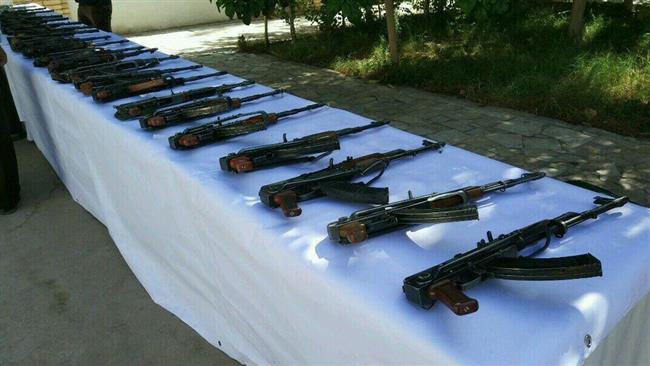 Iranian security forces have confiscated a large cache of weapons and an anti-aircraft cannon belonging to the so-called Jaish ul-Adl terrorist group in the country’s southeastern province of Sistan and Baluchestan.

He added that the depot was discovered and confiscated in the heights of Kouh Sefid near the town of Saravan in the eastern parts of the province on Friday following coordinated efforts and planning by police and security forces and their complete monitoring of smugglers and opponent groups.

He noted that the terrorists had plans to use the weapons against local civilians in the area.

Jaish ul-Adl is a small Salafist group on the Saudi payroll. It is based near the border with Pakistan, from where it carries out terrorist attacks against Iran. The terrorist group has killed a number of civilians and border guards.

Over the past months, Iranian forces have been engaged in clashes with terror groups, thwarting their terrorist activities on the border and within the country, arresting several of them and confiscating large amounts of explosives and bomb-making materials.

IRGC forces clashed with several members of the so-called Jaish ul-Adl terror group in Kouhak near the Pakistani border and killed five terrorists.

In June 2016, a police officer and five Jaish ul-Adl members were killed in clashes in the Khash region of Sistan and Baluchestan. A month later, the terrorists killed four Iranian border guards and fled into neighboring Pakistan.