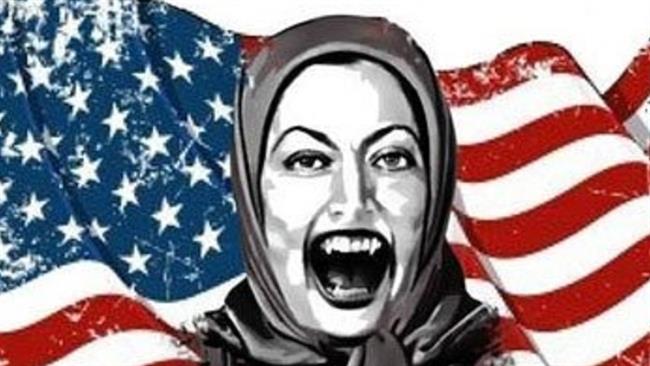 A hashtag uniting those who detest the anti-Iran Mujahedin-e Khalq Organization (MKO) is accumulating a significant following on Twitter.

Online users are hotly debating a recent annual gathering of the anti-Iran terrorist group, which turned out to have gathered largely a disinterested audience as mere extras.

The MKO has a dark history of assassinations and bombings against the Iranian government and nation. It notoriously sided with former Iraqi dictator Saddam Hussein in his eight-year war against Iran in the 1980s.

Out of the nearly 17,000 Iranians killed in terrorist assaults since the victory of Iran’s 1979 Islamic Revolution, about 12,000 have fallen victim to MKO’s acts of terror.

The terrorist group also helped Saddam in his brutal crackdown on his opponents.

The gathering of the group last Saturday featured a ragtag crowd of youths, who would keep seizing opportunities to escape the venue for a snack or a nap.

Later, some of them revealed they could not make much or any sense of what was being talked about at the event.

“They invited you?” one was asked. “Yes, of course, like everybody here,” he answered.

“Have you been inside? And… you don’t understand [what is being talked about]?” he was again asked.

“No, nothing. [Just] speaking, speaking…, and I wanna sleep. And we come outside, drink, eat, relax…,” he said.

“You came all over here just for the meeting?” a female was asked.

“They paid for the whole trip, right?”

“No, we have to pay something, but a small amount of money. I think it is a strategy to bring us here, and because it’s Paris, and they made it very cheap so they can have their rally,” she said.

The ticket to Paris also reportedly wooed in many Afghans, who said they knew naught about Iranian politics.
Also present at the meeting were Newt Gingrich, a former speaker of the US House of Representatives and a close associate of US President Donald Trump, as well as former US official John Bolton, who are two habitués to anti-Iran gatherings.

Paris had hosted a previous convention of the MKO, which Faisal also attended.

During the events, MKO ringleader Maryam Rajavi and Faisal have been campaigning for the “establishment of democracy in Iran.”

This is while elections are held in Iran regularly, as opposed to Saudi Arabia, where an absolute monarchy rules and where the ruling family has put its name on the country.

Those contributing to #IranHatesMEK — MEK is another acronym for the MKO — are reminding the world of the atrocities and are questioning Paris, Riyadh, and Washington’s sponsorship of the group’s continued existence.

“The Last One”‏ uploaded a picture of Maryam Rajavi and wrote, “Not any thief has mask on his/her face! Not any terrorist has gun in his/her hand!”

“Good old days: #MEK leader received shelter & fund from Saddam when he was a US ally in 1980s,” wrote another user, who incorporated a picture featuring a handshake between former MKO head Massoud Rajavi and Saddam Hussein.
Another user posted a picture purportedly showing an MKO member “burying Iraqi Kurd children alive.”One picture posted by users featured an Iranian war victim beside a heap of medicine and an oxygen capsule.

“Traitors that sided with a foreign country to attack their own no longer have the right to call themselves Iranian,” read another tweet.

“If France was going to react to the massacres committed by #MEK, the #EiffelTower would blackout like forever,” and “Hey France! You are shelter of our murderers, can we judge you?” read two other tweets.