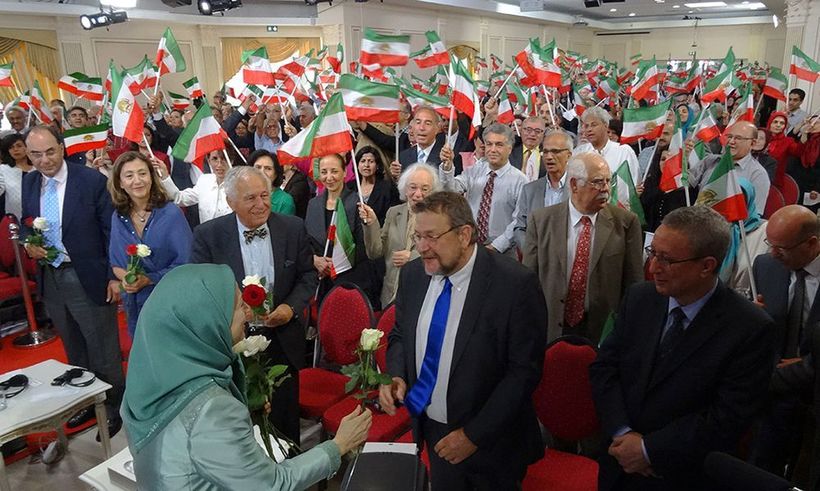 A week before the Mojahedin Khalq (MEK) holds its annual regime change rally at Villepinte in Paris next Saturday, Belgian MEP Gérard Deprez, Chair of the Friends of a Free Iran in the European Parliament has issued a statement which he claims has been signed by 265 parliamentarians. As well as expressing concern over the role of Iran’s Islamic Revolutionary Guard Corps, the statement also mentions “Rouhani’s minister of justice is a self-confessed murderer who was a member of the Death Committee, ordering the execution of over 30,000 political prisoners in 1988, mostly from the main opposition People’s Mojahedin Organization of Iran (PMOI/MEK). He concludes his press briefing by stating: “In order to express our solidarity with the Iranian democratic opposition, I will attend the FREE IRAN gathering in Paris on 1 July where I will present the support of 265 members of the European Parliament for this joint declaration…” I wonder how many MEPs would actually sign any statement so obviously meant as a show of support for the MEK.

To find out, I spoke with the offices of several MEPs who are concerned and actively involved in the issue of human rights in Iran. None of them knew anything about such a statement, but said that with such widespread support it is something they definitely should have been aware of.

Perhaps there is good reason for this. Like many statements and petitions over the years which mention the MEK this looks like fake news. Anyway, it would have been much easier to pass this off as genuine if Deprez had also published the names of the 265 signatories. As parliamentarians, it is doubtful they would feel endangered by publicly announcing their views in this way.

Unless, of course, they had spotted the factual errors and grammatical mistakes typical of documents written by the MEK themselves. The MEK has history. For years the MEK has interfered in this way – claiming huge numbers of supporters among politicians - in national parliaments across Europe, particularly in the UK. It got so ridiculous that several British MPs complained about these fake numbers and it was stopped. Let’s hope the European Parliament will take similar steps.

The MEK are expert at manipulation and misuse of democratic institutions – both the systems themselves – writing self-promoting statements and then faking signatories – and by using intimidation against persons inside the parliament. Corruption is wormed into parliament along with every MEK visit.

The MEK’s agenda is not unknown. The group advocate violent regime change against Iran. What is not so obvious is how they are able to infect parliamentary work with this agenda. This statement is a typical example. Their supporter Gérard Deprez has used his own website to announce the seemingly popular statement. It is then fed through various outlets, from MEK supporters to EUReporter until it takes on the appearance of genuine news. If we dig a little deeper into EUReporter’s Sponsored Posts though we find many paid for articles promoting the MEK. (For those who don’t know, the MEK uses a front, ‘the National Council of Resistance of Iran’ to disguise its activities. It’s just names.)

Still, it’s worth looking a little more carefully at the timing of this statement, a week before a ‘grand gathering in Paris calling for regime change in Iran’. It might have something to do with the usual list of paid speakers who are willing to turn out to such a controversial (advocating violent regime change on French soil) event. Past speakers include John Bolton, Rudi Giuliani and  Prince Turki Al Faisal Al Saud . No Iranians. Even the audience, far from being “tens of thousands of Iranian expatriates” is largely made up of non-Iranians offered a cheap trip to Paris on condition of attending the event; refugees, students, even actors. (It’s worth querying Deprez’s veracity as a purveyor of news since he also claims that 100,000 people will fit into Villepinte for the rally.)

When your only supporters are regime change pundits with extremist views, it would be ‘good news’ and affirmation indeed to find that 265 Members of the European Parliament who don’t believe in regime change also support your cause. If it seems unlikely such support would be forthcoming, then why not manufacture the good news.

In any case, the MEK’s backers don’t care about how this looks. What matters is that this kind of interference will hinder any progress in discussions of Iran’s human rights in the European Parliament. Whether the MEK rally has any real effect in influencing opinion is irrelevant – the MEK use this for internal consumption as proof to the members of western backing. What matters is that there is a spanner in the works.

This article was originally published by huffingtonpost.