Shams al-din Hosseini Naeeni was born on March 28, 1933 in Naeen, Isfahan Province. He was Representative of the Naeen people in Iranian Parliament. On June 28, 1981, Hosseini Naeeni was killed due to a bomb explosion the central office of the Islamic Republican Party in Tehran; the bomb was devised by the terrorist MKO. 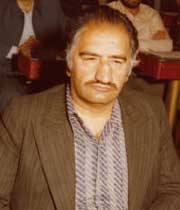