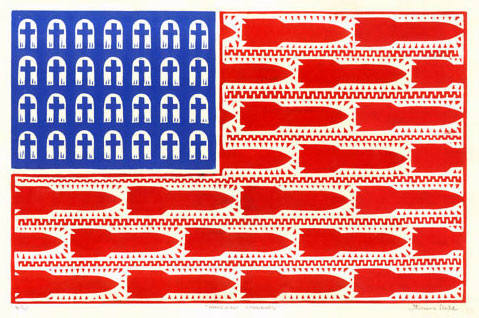 If there's one thing that the United States truly excels at — aside from diabetes and predatory lending — it's psychological projection.

For those uninitiated in this ancient art, psychological projection "involves projecting undesirable feelings or emotions onto someone (or something) else, rather than admitting to or dealing with the unwanted feelings." It's a defense mechanism to avoid dealing with your own bullshit, to put it simply.

So, for example, when you terrorize half a dozen countries with flying bomb-dropping robots, or are caught operating secret torture dungeons in Africa and Eastern Europe, or arm Takfiri maniacs in hopes of destroying peaceful nations on the other side of the world, or bomb multifarious brown countries with conventional planes flown by pilots hopped up on amphetamines, or impose sanctions that kill 500,000 children, or just straight-up occupy countries, sometimes for dozens of years or more, and then point the finger at a nation that you can't destroy, because it's actually capable of defending itself and protecting its national interests — this is the crème de la crème of psychological projection. Sorry for the run-on sentence. [Edit: It's not a run-on sentence. Thank you commenter "tom".]

Mattis made the remarks one day after Donald Trump’s government imposed new sanctions on Iran in response to it testing a ballistic missile. Because if there's one thing the United States will not tolerate, it's any country that can protect itself from the United States.

Here's more from our friend Mattis: "We have seen [Iran's] misconduct, their misbehavior, from Lebanon and Syria to Bahrain and to Yemen and it's got to be addressed at some point."
We love how Mattis includes Bahrain in his laundry list of Iranian horrors. As if we're supposed to be outraged that any country might oppose a despotic regime propped up by the United States and Great Britain. How could you, Tehran?

And of course, it's hard to get too upset about Iran's role in Syria, considering that Tehran was invited by the sovereign government of Syria to help defeat extremists armed by the U.S., Turkey, Saudi Arabia — all the big names in the democracy promotion industry. Yes, Iran was "asked" to get involved in Syria. Is Washington even aware that this word exists? Certainly not when it comes to its "anti-terror" operations in Syria...

It really is special when the United States — a country that deposed the democratically elected leader of Iran, and then replaced him with a murderous autocrat, and then a few years later helped a neighboring rival use chemical weapons against the Iranian people, and then a few years after that shot down an Iranian airliner  — wags its finger at Iran and says, "these monsters have to be 'addressed' at some point!"

Holy shit. Stick a fork in it, Mattis. You're embarrassing yourself.