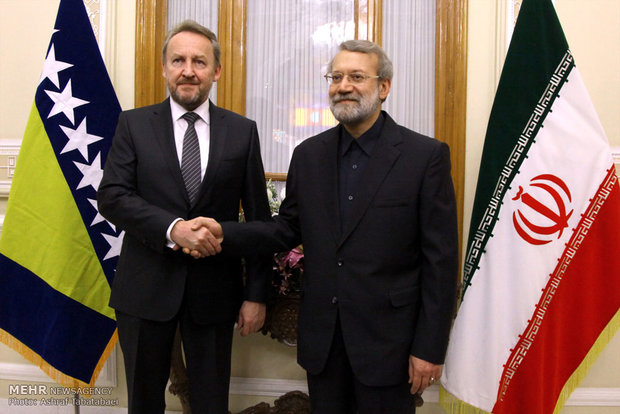 TEHRAN, Oct. 26 (MNA) – Iranian Parliament Speaker Ali Larijani said combating terrorism requires a global will, adding that terrorist events in region occur on a faster pace than countries can think of political solutions for them.

Ali Larijani made the remark in a meeting with the visiting chairman of the Presidency of Bosnia and Herzegovina, Bakir Izetbegovic, in Tehran on Tuesday.

He stressed that terrorism is a threat against the security of all countries in the world, saying “one reason for the increase in terrorist attacks is the instrumental use of terrorism by some countries which lose the control to the terrorists after a while.”

“Other factor is the nurturing of some people with Wahhabi ideology that has led to spread of extremism and terrorism in the region and the world,” he added.

Elsewhere, Larijani pointed to Iran and Bosnia’s bilateral relations, saying “economic and trade ties between the two countries have not developed on the heels of political relations. The current situation before the two sides, however, offers good opportunities to remedy that.”

Larijani went on to add that cooperation between the two sides’ chambers of commerce as well as facilitation of banking transactions can help improve bilateral trade ties.

“The Parliament of Iran fully supports expansion of relations with Bosnia and Herzegovina,” he stressed.

The Bosnian senior official, for his part, maintained that the two countries have retained political relations at a satisfactory level, and the economic relations will now have a chance to boost thanks to the removal of sanctions.

“Bosnia has a good status in the European Union and the Islamic Republic of Iran can gain access to the EU’s massive market by forming joint companies with Bosnia,” he said.

He further voiced confidence that Iran as a stable regional power can help tremendously with settling the issues in the Middle East, including terrorism.