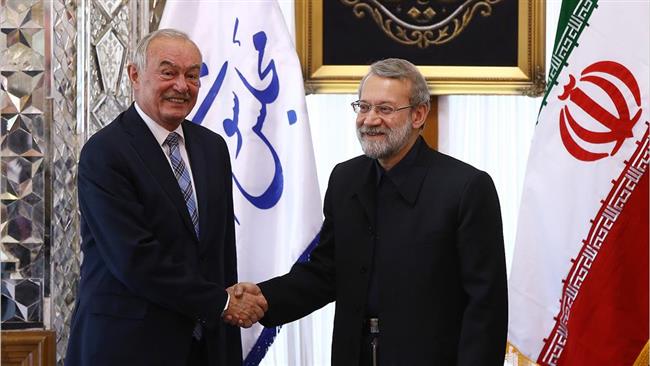 Iranian Parliament Speaker Ali Larijani says terrorist groups nurtured by the United States and its regional allies pose a threat not only to the region but to all countries across the world, urging an effective campaign to uproot the ominous phenomenon.

“The US and its allies in the region have created a warmongering climate which has led to the proliferation and increase of terrorist groups in the region, but this problem is not currently confined to the region and is a threat to the entire world,” Larijani said in a meeting with First Vice-Chairperson of the Czech Republic Senate Přemysl Sobotka in Tehran on Monday.

“An effective campaign against terrorist movements requires a serious fight against its roots,” he added.

He said the latest round of Syria talks, which were convened in the Swiss city of Lausanne on Saturday, were fruitless and stressed the importance of paying attention to cultural roots of terrorism in the campaign against the scourge.

“The Islamic Republic of Iran has believed in the settlement of the Syrian crisis through diplomatic [approaches] since its outbreak but world powers and their regional allies do not believe in the resolution of the crisis in the country through dialogue and this is one of the reasons for the failure of the previous negotiations and the recent meeting in Lausanne,” the top Iranian parliamentarian said.

The latest round of talks aimed at putting an end to the crisis in Syria came to an end in Lausanne on Saturday without even the release of a joint statement by its participants.

The four-hour long Lausanne talks were convened by US Secretary of State John Kerry in Lausanne with the participation of foreign ministers from Russia, Iran, Iraq, Saudi Arabia, Turkey, Qatar, Jordan, and Egypt as well as UN Special Envoy for Syria Staffan de Mistura.

Larijani further warned that efforts to topple the legitimate Syrian government of President Bashar al-Assad would lead to terrorist groups taking the helm in the conflict-stricken state and said only the Syrian people must determine the country’s fate.

The conflict in Syria, which flared up in March 2011, has claimed the lives of more than 400,000 people, according to an estimate by De Mistura.

The Czech senator, for his part, said terrorist groups, which have been formed as a result of meddlesome measures by some countries, currently pose the biggest security threat to the world.

He added that Tehran and Prague can boost cooperation in the fight against terrorism.