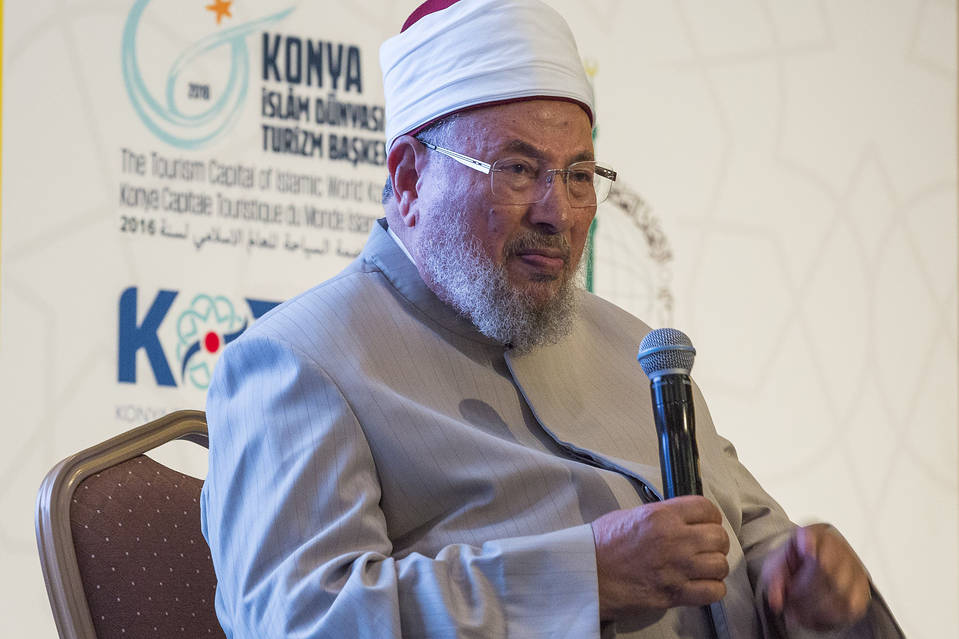 Religious programming is popular throughout the Middle East. Television viewers call in or send questions via email or social media to ask scholars of Islamic law about all manner of things. Most questions relate to their personal lives, from the mundane—can Muslims listen to pop music?—to such issues as inheritance, alimony and contraception.

Every once in a while, however, a viewer raises an issue of political consequence. Such was the case with a 2015 episode of the Al Jazeera talk-show “Al-Sharia wa Al-Hayat” (Shariah and Life), which has recently become the subject of intense debate. The following question was asked: “Is it permissible—in the Syrian context—for an individual to blow himself up to target a group that owes allegiance to the Syrian regime, even if this causes casualties among civilians?”

This was the response:

The speaker was Yusuf al-Qaradawi, the intellectual force behind the Muslim Brotherhood and other radical Islamic groups. He has written more than a hundred tomes on theological and jurisprudential issues that have attracted many adherents and numerous detractors. In addition to his scholarship, he has devoted a lifetime to religious political activism. Through his many writings, sermons, speeches and religious edicts, al-Qaradawi has become recognized as a progenitor of radicalism in the Middle East and beyond.

His answer regarding suicide bombings is typical of his extremism. By failing to reject the premise of the question, al-Qaradawi accepted suicide bombings as a legitimate weapon of warfare. This openly contradicts the prohibition in Islamic law on committing suicide.

Al-Qaradawi also fails to uphold the distinction between combatants and noncombatants, a cardinal principle of modern international humanitarian law and Islamic laws of war. The Holy Quran and various Prophetic sayings, otherwise known as the Hadith, establish an unquestionable prohibition on targeting noncombatants.

More alarmingly, al-Qaradawi entrusts the so-called jamaa—a term that can mean “the group” or “the community” and was left undefined—with the authority to order young women and men to become suicide bombers. He finds no religious compulsion or moral imperative to condemn the heinous practice of transforming human beings into indiscriminate instruments of death. He fails to denounce the evil of exploiting young women and men to advance the cause of terror.

He effectively condones and blesses the fanaticism of Osama bin Laden, al Qaeda in Iraq’s Abu Musab al-Zarqawi, Islamic State’s Abu Bakr al-Baghdadi and the leaders of Boko Haram, all men who have held Islam hostage and desecrated its vision of peace, tolerance and moderation. In doing so, al-Qaradawi has earned the title: The Pontiff of Terror.

Like al-Qaradawi, many self-styled imams, sheikhs and scholars have perverted the message of Islam and distorted its values to serve their political purposes through the justification of violence. The question we must consider is: How should the international community combat this ideology of terror?

This issue poses hard questions of law and policy. It requires a holistic political, legal, economic, social and educational strategy that aims to destroy the root causes of terrorism. Societies committed to democratic governance must strike a delicate balance between upholding civil liberties that are indispensable in a democracy and providing the legal and institutional tools that enable a society to protect itself against the evils of extremism.

International human-rights law provides guidance. Articles 19 and 20 of the International Covenant on Civil and Political Rights (ICCPR) recognize that the freedom of expression “carries with it special duties and responsibilities.” This generates an obligation on governments to protect society against views and opinions that promote extremism and incite violence.

The international community, perhaps acting through the United Nations Security Council, should consider requiring governments to take the necessary legislative measures to proscribe speech that incites, justifies, promotes or glorifies acts of terrorism, and to ensure that the appropriate criminal sanctions are in place to enforce such a proscription. The U.N. Human Rights Committee, which is charged with monitoring compliance with the ICCPR, should require states to report on these efforts.

The international community also needs to examine the avenues by which the political and legal architecture of counterterrorism can be further developed to include rules preventing the dissemination of views that promote or extol acts of terrorism.

Within days of the 9/11 attacks, the Security Council unanimously adopted Resolution 1373, which obligated U.N. member states to take legislative and administrative measures to prevent the financing of terrorism. Other Security Council resolutions established watch lists of individuals known to have links with terrorist organizations.

These resolutions, which include oversight and review mechanisms, provide a template to establish mechanisms through which governments can report what they deem to be cases of open incitement to terrorism and religious or political justifications for acts of violence. States should also be allowed to use these reporting mechanisms to name and shame media outlets that provide a platform for individuals who pontificate on behalf of the evil of terrorism.

History is a harsh teacher. Whether it is the venomous effect of RTLM broadcasts that fanned the fire of the Rwandan genocide or the horrors of the Holocaust that were justified by the evil of Nazi propagandist Joseph Goebbels, history has taught us that words can be used as weapons. The global fight against terrorism will remain incomplete as long as the international community fails to mobilize to destroy the intellectual fuel that justifies the evil of terrorism.

Mr. Reda is Eqypt’s ambassador to the United States.