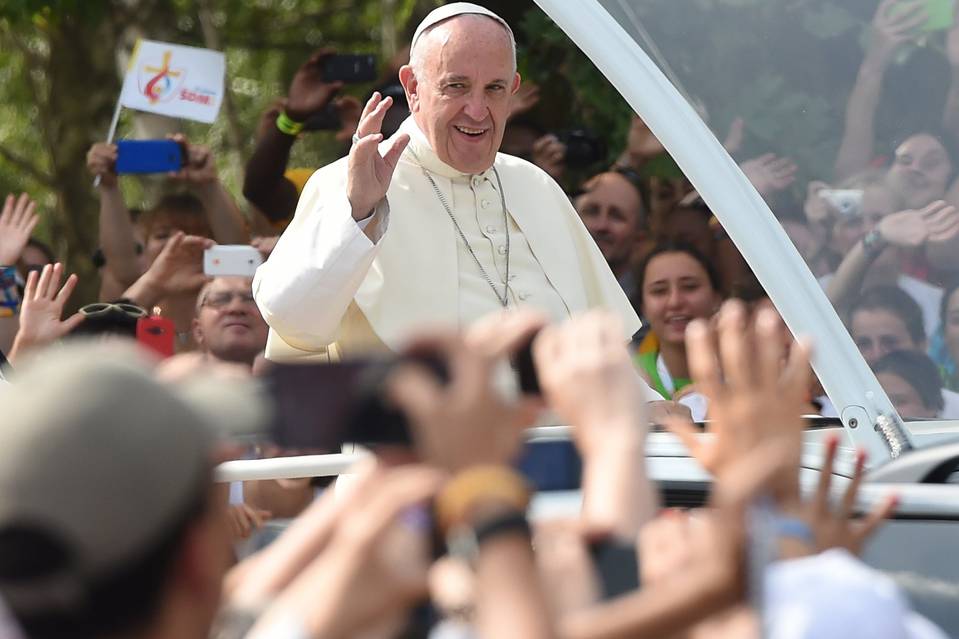 Pope Francis said the inspiration for terrorism wasn’t Islam but a world economy that worshiped the “god of money” and drove the disenfranchised to violence.

“Terrorism grows when there is no other option, and as long as the world economy has at its center the god of money and not the person, “ the pope told reporters late Sunday as he returned to the Vatican from a five-day visit in Poland. “This is fundamental terrorism, against all humanity.”

Speaking on his flight from Krakow, the pope was responding to a question about links between Islam and recent terrorist attacks, particularly the killing on Tuesday of a priest in northern France by followers of Islamic State.

Pope Francis suggested that the social and economic marginalization of Muslim youth in Europe helped explain the actions of those who joined extremist groups. “How many youths have we Europeans left empty of ideals? They don’t have work, and they turn to drugs and alcohol. They go [abroad] and enroll in fundamentalist groups,” the pope said.

His own experience in interreligious dialogue had shown him that Muslims seek “peace and encounter,” he said. “It is not right and it is not just to say that Islam is terroristic.” And he said no religion had a monopoly on violent members.

“If I speak of Islamic violence, I should speak of Catholic violence. Not all Muslims are violent, not all Catholics are violent,” Pope Francis said, dismissing Islamic State as a “small fundamentalist group” not representative of Islam as a whole.

“In almost all religions there is always a small group of fundamentalists,” even in the Catholic Church, the pope said, though not necessarily physically violent. “One can kill with the tongue as well as the knife.”

The pope’s remarks echoed his words on Wednesday, when he told reporters with him on the plane to Krakow that the recent spate of terror attacks was part of a war comparable with the world wars of the previous century.

The pope added then that the current violence was over economic and political interests rather than religion. “There is war for money,” he said on Wednesday. “There is war for natural resources. There is war for the domination of peoples. Some might think I am speaking of religious war. No. All religions want peace; it is other people who want war.”

Every day of his visit in Poland, the pope voiced his well-known support for open-migration policies. But his trip there was shadowed by the recent spate of terrorist attacks in Europe.

At an outdoor Mass near Krakow earlier on Sunday, he urged the crowd of 1.5 million people to welcome migrants and warned against the temptations of capitalism and consumerism.

“People may judge you to be dreamers, because you believe in a new humanity, one that rejects hatred between peoples, one that refuses to see borders as barriers and can cherish its own traditions without being self-centered or small-minded,” the pope told the crowd, which included Polish President Andrzej Duda.

The Polish government, controlled by the conservative Law and Justice Party, has opposed the more-open policies of neighboring Germany toward refugees and other migrants from the Middle East and elsewhere.

On Saturday, during a visit to a church in Krakow, the pope recited a prayer asking God to spare the world from a “devastating wave of terrorism.” But the pope also repeated his support for welcoming refugees and other migrants from the Middle East and Africa, despite concerns in Europe that the influx offers terrorists the possibility of traveling back and forth to Europe undetected.

It was his first visit to Poland, one of Europe’s most deeply Catholic countries, where the late St. John Paul II, who earlier served as archbishop of Krakow, remains a towering figure. Some followers of John Paul, including Polish bishops, see Pope Francis’ liberalizing moves, particularly his relative leniency on divorce, as undermining the legacy of his more conservative predecessor.

Pope Francis’ planned speech to the bishops on Wednesday had been expected to address that tension, but the week before, the Vatican announced that the meeting would take place behind closed doors.

Pope Francis paid tribute to John Paul several times during the visit, venerating a phial of his blood after a Mass on Saturday.

Pope Francis followed in John Paul’s footsteps, and those of Pope Benedict XVI, by becoming the third pope to visit Auschwitz on Friday, the dramatic climax of the visit. The pope made no public remarks, only writing in the book of honor: “Lord, have mercy on your people! Lord, forgiveness for so much cruelty!”

The Sunday Mass was the culminating event of World Youth Day. Pope Francis urged the crowd to ignore the distractions of materialism. “In [God’s] eyes, the clothes you wear or the kind of cellphone you use are of absolutely no concern,” the pope said.

That remark underscored the challenge the church faces in Poland and other post-Communist countries, which have embraced the values of capitalism and aspirational consumerism that the pope so often warns against.

“Say a firm ‘no’ to the narcotic of success at any cost and the sedative of worrying only about yourself and your own comfort,” the pope said.

Pope Francis paid tribute to native son Pope John Paul, who founded the World Youth Day tradition, saying that he “has rejoiced from heaven, and he will help you spread the joy of the Gospel everywhere.”

Many in the crowd waved national flags. At the end of the Mass, the pope announced that the next World Youth Day would be held in 2019 in Panama, bringing the triennial celebration back to Latin America. Pope Francis presided over World Youth Day in Rio de Janeiro in 2013, a few months after becoming Pope.

The pope celebrated Mass on a white stage dominated by a colossal picture of Jesus, with rays emanating from his chest to represent his divine mercy. The image is associated with visions of the Polish St. Faustina Kowalska, who was canonized by John Paul.