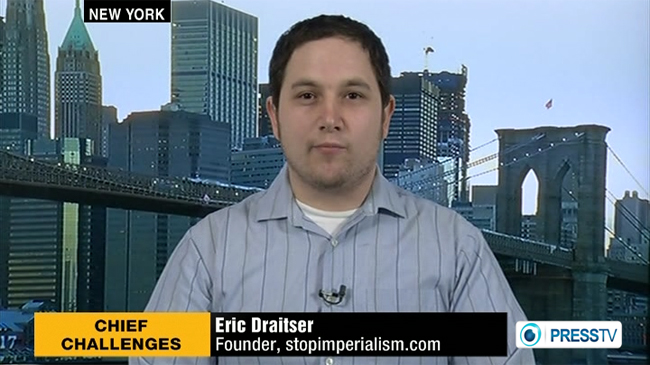 The United States is responsible for the creation of Daesh (ISIL) and other terror groups in the Middle East in a bid to topple Syria’s legitimate government and revive the Western colonial system in the region, says an American geopolitical analyst.

Eric Draitser, the New York-based founder of stopimperialism.com, made the comments on Sunday, while discussing Washington’s increasing calls on its allies to step up the military campaign against Daesh in Syria and Iraq which began in 2014 without a UN mandate.

He said the American government’s pressure on other countries signals a growing feeling of “helplessness” the US feels about the supposed military campaign against ISIL.

“On the one hand, Washington seems to be, rhetorically at least, playing up the fact that it is pulling at all the stops and using all the necessary resource to fight against ISIS [ISIL] and its development both in Syria and in Iraq and then on the other hand is the looming and important point that the US has done everything it can to facilitate” it rise, Draitser said.

He noted the US is seeking to “reassert” control in Iraq and carve up Syria according to a strategy that has been laid out by the Brookings Institution, a Washington-based think tank.

Washington was well aware of the terror group’s rise, a fact that was documented as early as 2012 as official US government papers suggest, Draitser added.

The analyst was referring to a US intelligence report from August 2012, which states that "the possibility of establishing a declared or undeclared Salafist principality in eastern Syria" was "exactly what the supporting powers of the opposition want, in order to isolate the Syrian regime.”

“The United States was willing to accept any risks associated with allowing ISIS to emerge because it thought this was a clear path to regime change,” Draitser argued.

He said the outcome of that policy is now visible in Syria, just as it was in the case with al-Qaeda during the so-called “war on terrorism,” showing once more that “most potent and most powerful terrorist organizations are always directly or indirectly connected to Western intelligence.”

“The inescapable fact is that Ashton Carter and Barack Obama and the Washington bipartisan consensus and the military-industrial complex, the intelligence community, all of these organs of political and institutional power that are embedded in the empire, they are all responsible for the rise of ISIS, for the development of ISIS and for the continued dismemberment of the region,” he said.

“The game is divide and conquer, the game is imperialism and colonialism in the Middle East, just as it has been for more than three centuries,” he concluded.