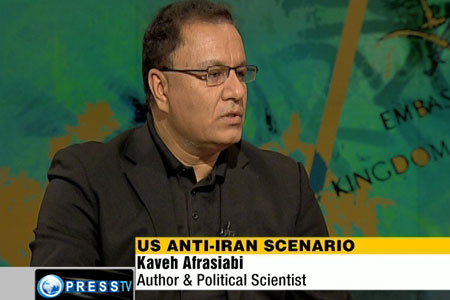 Press TV has interviewed Kaveh Afrasiabi, a Boston-based author and political scientist, to discuss Leader of Islamic Revolution Ayatollah Seyyed Ali Khamenei’s recent call on Muslim nations to unite against terrorism, advising them against the West’s reluctance to curb the threat.

Following is a rough transcription of the interview.

Press TV: This is not the first time that the West has been accused of not being sincere in its fight against terrorism, particularly when it comes to the Daesh terrorist group which is wreaking havoc in Iraq and Syria. Do you share that view as well?

Afrasiabi: Absolutely! And I think that even some US lawmakers such as Rand Paul and many pundits and analysts share the sentiment that the US, indirectly or directly, supports these terrorist groups for its own strategic purposes, particularly vis-à-vis the countries that it dislikes in the region and there is plenty of empirical evidence to support that as a result of which we see that just yesterday opinion polls in Iraq suggested that one of every three Iraqis is absolutely convinced that the US is behind ISIS (Daesh) and is thwarting the government’s attempt to get rid of it in Iraq, and we have also heard some complaints by some Iraqi military commanders to that effect.

So, I really think that the Leader’s statement echoes a growing suspicion in the Middle East and beyond about the US’s counter-terrorism pretentions and the fact that you have the US taking some token measures, in my opinion,…while on the other hand so many sophisticated US weaponry, such as shoulder to air missiles, anti-tank missiles and so on, have somehow fallen in hands of these Daesh terrorists and many point to the US and its regional allies as the culprits.

Press TV: Right, but what then of the international coalition against Daesh that the US had formed and all those bombs that it has dropped on Iraq as well as parts of Syria. What of that? What of those speeches that Obama keeps giving against Daesh and against fighting terrorism?

Afrasiabi: Unfortunately they are mostly window-dressing because they are not backed up by real action.

You see, for example [US] Secretary of Defense Ashton Carter making a high-level press conference right after the Belgium attacks to announce that a Daesh high operative has been assassinated, but you know these really do not amount to much because what you need is sustained international cooperation in order to neutralize this threat that has cancer-like growth beyond Iraq and Syria, into Libya and some parts of Africa and certainly some parts of Europe; and some analysts suspect that through its regional ally Turkey, the United States has actually blessed the fact that so many terrorists have infiltrated Europe that as a result Europe is feeling much more insecure and dependent on the US.

So, there is a lot of complex issues that come into play as to why the United States which has had a longstanding habit of using the [so-called] Islamist radical card against the governments and regimes that it fights and friendly towards its interests going back to the Sukarno regime in Indonesia in the 1960s and the mercenaries in Afghanistan during the 1980s and on and on. So the US’s dossier is very long.

Press TV: the Leader has said that the solution lies in greater cooperation between Muslim nations and unity between them. Is that a viable option?

Afrasiabi: Absolutely, because the real counter-terrorism at the local and regional level can transpire when the threat of terrorism is mitigated through Islamic solidarity; because there is common interest among the Sunnis and Shias vis-à-vis the threat of terrorism that destabilizes the region, serves the direct interests of the Zionist regime and so on and splintering these Arab and Muslim nations into smaller groups and so forth is not in the interest of the regional states. Might be in the interest of some hegemonic outside powers but solidarity among Muslims is a prerequisite for effective fight against terrorism.