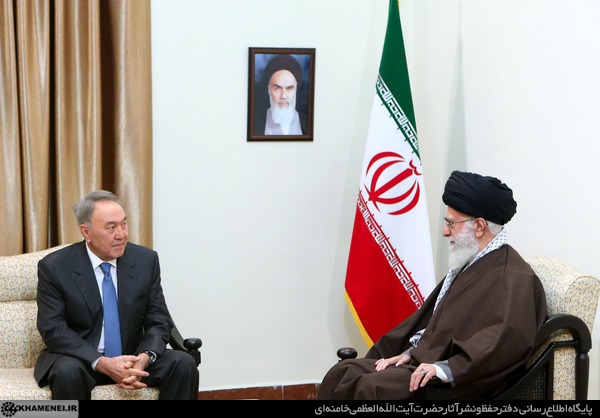 TEHRAN (Tasnim) – Leader of the Islamic Revolution Ayatollah Seyed Ali Khamenei lashed out at the Western states, the US in particular, for their definition of terrorism, and questioned the westerners’ seriousness in confronting terrorism.

Speaking at a meeting with the visiting Kazakh President Nursultan Nazarbayev in Tehran on Monday, The Leader said Washington is providing assistance for terrorist groups such as Daesh (also known as ISIL) in Iraq, and added that the issue is an example of dishonest behaviors shown by various self-declared anti-terror coalitions.

“In a bid to justify their double-standard attitude, they (Westerners) classify terrorism into good and bad,” Ayatollah Khamenei noted.

“Certain powers, particularly the US, are not sincere and serious in so-called campaign against terrorism, but Muslim countries can distance the Muslim world from such threat through honest cooperation,” Ayatollah Khamenei stated.

Ayatollah Khamenei further said Muslim nations are facing the threat of terrorist groups “acting in the name of Islam but in fact (acting) against Islam and Muslims.”

Cautioning that Western powers are not willing to see Muslim countries united, Imam Khamenei reiterated that dealing with the threat of terrorism requires enhanced cooperation among Muslim countries within the framework of wise and logical policies.

As regards ties with Kazakhstan, Ayatollah Khamenei said the Islamic Republic welcomes the bolstering of cooperation with Kazakhstan in different political and economic sectors and particularly in defining the legal status of the Caspian Sea.

Also at the meeting, Nazarbayev described terrorism as a serious threat, and added that the Western states' campaigns against legitimate regional governments are to blame for the scourge of terrorism and the unbridled flow of refugees to Europe.