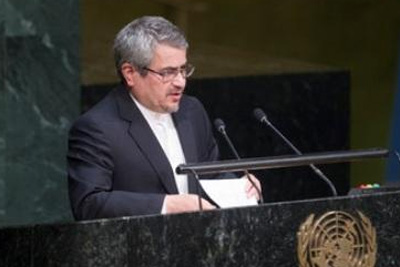 "Dialogue, moderation, tolerance and human rights are the most effective antidotes to violent extremism, which tries to twist religions and pervert human minds towards deaths and destructions." Said ambassador and permanent representative of the Islamic Republic of Iran to the United Nations, Gholamali Khoshroo, addressing a UN General Assembly meeting in New York.

Following is the full text of his statement:

On behalf of its sponsors, I have the honour to introduce, under agenda item 16, draft resolution A/70/L. 21, entitled “A world against violence and violent extremism”.

Let me first express my sincere gratitude to all the sponsors of the draft resolution and all other delegations for their constructive participation and support during the open and transparent consultations that my delegation conducted. Their proposals, suggestions and interventions made the draft resolution more robust and helped to accommodate the views of different Member States. The consensus and cross-regional sponsorship also underscore the universal recognition of the need to act on the pressing global challenges of violence and violent extremism.

This draft resolution is a follow up to and an update of the resolution that my delegation took pride in submitting to the Assembly in 2013, which was adopted by consensus. The idea behind this resolution was presented by H.E. Mr. Hassan Rouhani, President of the Islamic Republic of Iran, in his address to the 68th General Assembly. The idea was an offshoot of the overarching theme in his presidential campaign platform, which called for interaction, tolerance, moderation and prudence over violence and extremism.

Violent extremism, and its side effects, including sectarian violence, have been on the rise since the WAVE resolution was first adopted in 2013. In the wake of the atrocities committed by the extremist groups in Syria and Iraq in the past two years and their recent cruelties in such places as Paris, Beirut, Egypt, Ankara, and recently in the US and elsewhere, it is more significant and relevant that the General Assembly pronounces itself once more on this challenge. In our globalized world, where threats recognize no border, this challenge could only be thwarted through joint efforts by the entire international community.

Dialogue, moderation, tolerance and human rights are the most effective antidotes to violent extremism, which tries to twist religions and pervert human minds towards deaths and destructions. Thus, it is important that the international community and its individual Member States adopt effective measures along this line and implement them with a view to dealing with the conditions conducive to the genesis and spread of violent extremism. In this respect, it is important to avoid associating violent extremism with any nationality and religion. In fact, those who blame religions and engage in hate speech against the followers of divine religions, fanning the flames of discriminatory exclusion, play right into the terrorists’ hands and help them to recruit more members and spread much heinous extremist ideologies. By reaffirming these points, the General Assembly, as the sole universal body, provides a solid basis for promoting an institutionalising fight against violent extremism and sectarian violence at their roots.

The draft resolution means to serve as a call to break the endless repetition of the past, uphold the concept of citizenship over sectarian allegiances, place the next generation’s prosperity above the settling of past scores and look to the future with hope and prudent moderation as the master key. By adopting the draft resolution, all Member States would also concur that in dealing with the threat of violence and extremism, we all need to cooperate, and there is no room for a zero-sum game in any field.

Apart from certain basic technical update to the first Wave resolution, this draft also incorporates a few additional elements: It recalls and reaffirms measures taken at the national and multi-lateral levels and reaffirms the emphasis by the latest review of the Global Counter-Terrorism Strategy on the need to unite against violent extremism. It recalls, with appreciation, the High-Level General Assembly Thematic Debate on Countering Violent Extremism, held on 21-22 April 2015. It recognizes also local, national, regional and multilateral initiatives aimed at addressing the grievances that drive violent extremism and recognizes the effort made by UNESCO, including through organizing the Conference, held in June 2015, on “Youth and the Internet: Fighting Radicalization and Violent Extremism”, and notes increasing awareness about the need for a comprehensive approach to prevent and counter violent extremism and to address the conditions conducive to its spread. In the operative part, it encourages Member States to increase their understanding on the drivers of violent extremism, particularly for women and youth, so as to develop targeted and a comprehensive solutions to this threat. It takes note of the intention of the Secretary-General to propose a Plan of Action to Prevent Violent Extremism, and requests him to report to the General Assembly at its seventy second session on the implementation of the present resolution.

Finally, allow me to express my sincere hope that the draft resolution will gain the broadest possible support and be adopted by consensus. That will help accelerate coordination and cooperation among States towards addressing the growing problems emanating from violent extremism.