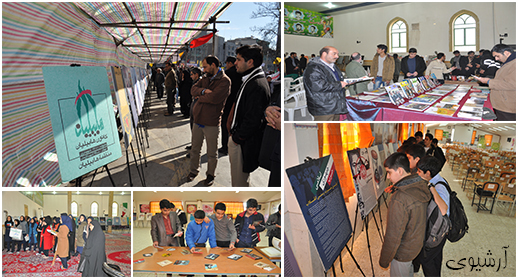 The 6-day long exhibition was dedicated to the review of Mujahedin e-Khalq organization’s numerous crimes.

The event included a variety of subjects from MKO’s background to the early post-revolution events and MKO’s role in numerous plots against the Islamic revolution. MKO’s crimes and their assassination of more than 12000 Iranian civilians, their escape to Iraq and collaboration with the dictator Saddam’s regime during the Iraqi imposed war on Iran, MKO’s role in suppression of Iraqi Kurds and Shiites uprising, Spoliation of Iraqi nation’s wealth by the MKO, MKO’s inner-ethnic relations, etc, were among other topics covered during the event.

Other topics included cooperation between the MKO and some anti Islamic republic groups under the cover of Human Rights entities, MKO’s role in guiding other terrorist groups such as Forqan, informing the youth on MKO’s method of spying, a review on some conspiracies conducted by the MKO which led to failure such as the Amol event and MKO’s cooperation with western intelligence services.