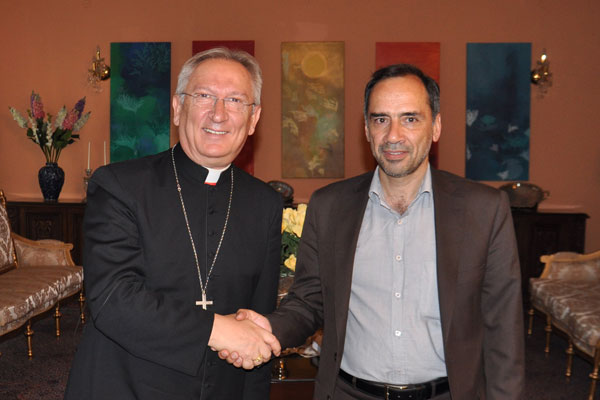 The Vatican's Apostolic Nuncio to Tehran says terrorism is generated fundamentalism and radicalism and terrorist is the people who act the barbaric actions.

“We have something to say very strongly to the world that no one has the right to use the name of God or to manipulate religion for political reasons,” said Archbishop Leo Boccardi during a meeting with Seyed Mohammad Javad Hasheminejad.

“This must be said very very clear and we must react together against ISIS and other groups,” he said, adding, “No one has the right to kill in the name of God. This is a blasphemy.”

Holy See nuncio to Tehran continued to say that the terrorists who are perpetrating crimes against humanity in the name of God are not men, they are animals.

Archbishop Boccardi added that the Christians are also victims of terrorism, but the world does not see. He added, “They are killing people and the world, the US, the European Union don’t see.”

“The Christians living in Mosul, in the plains of Nineveh, in Iraq, they are leaving, they’re abandoning their village and cities and no one say nothing.”

He added that we know who these members of ISIS are; they are the former army of Saddam Hussein.

“17000 is the victims of a war,” he continued, adding that the terror victims in Italy may be something around 1000.

“I’m sorry I think that now we can say that this was everything planned and it was a strategy. Because someone has the interest that the world of today is not the world of peace but it’s a world of terror.”

Seyed Mohammad Javad Hasheminejad, for his part, emphasized the role of the religions in marginalizing the extremists and terrorist groups adding that the political purposes are behind the terrorist activities.

“In order to advance their political purposes, the superpowers highlight the ideological differences of people,” he said, adding that if people focus on the commonalities of religions, the extremists will be isolated and the political purposes behind them will be nullified.