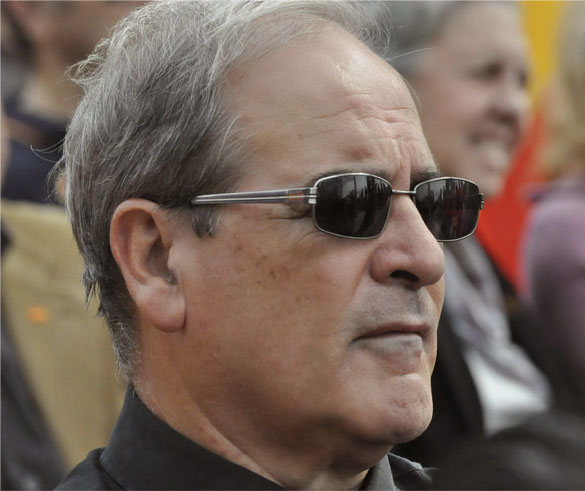 Manuel Galiana Ros, Spanish researcher and the author of the books “The Zionist lobby in Spain” and “The Global Crisis” described Wahhabi jihadism as a “fake Islamic ideology” created by new world order to “to destroy Islam from inside.” Following is an approximate transcription of our interview with him.

Over the past 35 years, more than 17000 people have lost their lives in terrorist operations conducted inside the Islamic Republic of Iran by western backed terrorist groups such as the Mujahedin e-Khalq organization (MKO, MEK). Why do you think there is no (or if there is any, few) coverage of these assassinations in main stream western Media? But instead they often picture Iran as the state sponsor of terrorism.

It is about what really happens in the West. Do the people really know that in the past 35 years about 17000 Iranian people have been killed by terrorist and Takfiri groups? No there is no information in Europe, not in Spain that I hear of about that. In fact Iran is never perceived in Europe as a victim of terrorism, but as supporter and promoter of terrorism. It is because all the mainstream Media are directly and indirectly controlled by Zionism. Not only the Media, they also have control over all news agencies. For example, one of the main 5 or 6 news agencies in the world, the Reuters, was already controlled financially in the year 1895 by the Rothschild family. They control money, they control Banks, they control corporations, they control all the mainstream Media, they control the world business, they control Hollywood and they control everything. I think I would like to see as soon as possible that the European Union and the Euro money, disappear. Because that is one of the main elements of control they have over Europe. The European Central Bank is depending on more electronic money on and on and the debt is increasing all the time in Europe. But I ensure that is going to end. I anticipate there are going to be serious changes soon.

The second international congress of 17000 Iranian terror victims is scheduled to be held in Tehran, August 2015. International scholars and political figures are invited to attend the congress. How do you see the significance of holding such events?

An event like that, that I myself was not aware of, most of the populations in Europe and America are not aware of either. So with that effort you will be doing, I hope the facts will be known and it will hopefully have some positive effects.

There are documents that indicate the Zionist regime of Israel, as a state sponsor of terrorism, was involved in the assassination of the Iranian nuclear scientists. Why is it that there is no reaction from the international organizations such as the UN?

It is because Iranian scientists and Iranian subjects are not important to them. Although there are many countries in the United Nations, there are a few important countries that are controlled by Zionism and many of the other non-important countries’ votes are conditioned by these few countries. So the fact that many Iranian people including the scientists have been killed is not relevant for the west.

Takfiri terrorism is the result of dogmatic thoughts and retrogressive views of some regimes in the region such as Saudi Arabia. Despite this bitter fact, these regimes are openly supported by the United States. What is your view about this?

Since Wahhabism and Takfirism started a long time ago, they have been progressing all the time, sometimes slowly. After the 80s, when Wahhabism was incorporated not only in Saudi Arabia and Qatar but also in Turkey, in Turkish mosques and educational system, it is much installed. The United States took over from the British. The British were traditional allies of the Saud family and it was in 1944, when the World War II was finishing, the then American president Roosevelt signed a treaty with one of the Saudi kings that included oil against military cooperation. That alliance counts for many years now and in the last 60 years so much money has been moving and that money can help condition and corrupt many western politicians.

The so called Islamic State, on one hand, is the illegitimate child of the extremist views of Salafism and Wahhabism, and on the other hand, the Zionist regime of Israel is considered as one of its significant supporters. In your researches, what did you find about these connections?

Speaking now specifically about Wahhabi jihadism, the definition basically would be: “the fake Islamist ideology of the new world order in order to create confrontations to destroy Islam from inside”. Everybody knows where this ISIS or caliphate or whatever it is called comes from. It has a precedent in Al-Qaida. Al-Qaida as everybody knows is an organization that was formed, created, financed and trained by both Mossad and CIA during the Afghanistan war with the Soviets. There are countries that train all these groups that really work against Islam, and provide them with weapons. Countries like the United States and the United Kingdom. There are other countries like Turkey and Jordan that make their territory available for military trainings. The terrorists can go across their borders.

There are also a couple of other elements that are not so widely known and that refers to some historical or religious aspects. It is known that many Jews converted to Islam in a fake way. In Arab language they are referred to as “Sabatin”. For example I would mention that somebody like Ataturk in Turkey was himself of Sabatin origin who was in very good terms with the British and Zionists in general. I am mentioning this because there is also a very strong suspicion that Wahabism also has those same roots; Zionist and Talmudic roots. The fact is, and that is recognized in some reports by the Iraqi intelligence and even recognized by the American Intelligence, that the Saud family origins from Jews of Basra in Iraq and Mr. Abdolwahhab’s grandfather had been a Jew coming from Turkey. So there is the presumption that these people should be coming from these Sabatin origins.