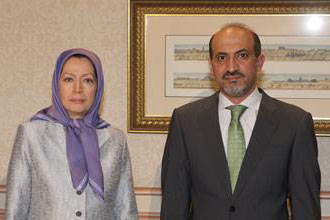 The head of the so-called Syrian National Coalition, Ahmad Jarba, met with the Mujahedin-e Khalq (MEK, a.k.a. MKO) ringleader in Paris and called MKO members as "brothers" of the Syrian opposition.

The meeting comes some two weeks after the US president Barack Obama's meeting with the SNC head.

"Fate of the Syrian people and revolution is tied to the fate of Iranian people and their legitimate representative," Jarba said, referring to the MKO terrorist group and its political arm, NCRI.

Earlier this month, the US State Department spokeswoman said the US will recognize the representative offices of the so-called Syrian National Coalition (SNC) as a diplomatic foreign mission.

Marie Harf said that the decision is another move to formalize the existing relationship between Washington and the SNC.

According to the reports, the foreign-backed SNC hopes to form coalition with Tel Aviv.