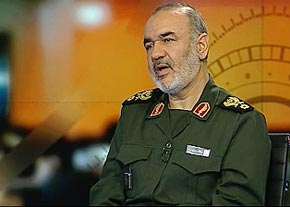 “Last week’s incident at Camp Ashraf will have wide strategic significance for the region’s future developments,” the Iranian commander said in a TV program on Saturday evening.

His comments came after an attack on Camp Ashraf in Iraq’s eastern province of Diyala on September 1 killed 52 members of the terrorist organization, including some top MKO commanders and members of its leadership council.

Brigadier General Salami further clarified that the attack was carried out by a group of Iraqi youth who were outraged by the presence of the notorious terrorists inside their country.

He went on to say that the strategic impact of the latest move on the continuation of the terrorist organization’s existance was much more enormous than that of Operation Mersad, although it was smaller in scale.

Operation Mersad, which began on July 28, 1988 and lasted a few days, was a counterattack by the Iranian Armed Forces against an incursion carried out by the MKO and supported by the Iraqi army. In that operation thousands of MKO members were killed while others fled to Iraq.

Brigadier General Salami also stated that last week's operation was a testimony to the Iraqi nation’s hatred for the MKO terrorist organization and its cruel activities in the Arab country.

The attack by the Iraqi people was so quick that neither the Iraqi army noticed it nor MKO members were able to react to it, the commander added.

He described the operation as an event that helped the Iraqis to become more self-confident as a nation, which he said will undoubtedly reject the presence of MKO terrorist group in their country anymore.

“With these incidents, Iraq will not be a haven for Monafeqin (MKO members). The Monafeqin seem to lack a safe refuge in Iraq even with the US support,” he concluded.

In a relevant development, the United Nations office in Baghdad announced on Saturday that Iraqi authorities are planning to relocate dozens of the MKO members from Camp Ashraf (now Camp of New Iraq).

The UN office added that the authorities will transfer the remaining residents of Camp Ashraf in northeastern Iraq to another facility in the Baghdad area.

Also, Ali Mussawi, spokesman for Iraqi Prime Minister Nuri al-Maliki, had stressed on Saturday that Baghdad has "the right to order them to leave."

Camp Ashraf houses members of the Mujahedin-e Khalq Organization (also known as MEK), which Baghdad says is in the country illegally.

The MKO is considered as a terrorist group since it has been behind many cases of bombings and assassinations against the Iranian officials and people.

The group also fought alongside the regime of former Iraqi dictator Saddam Hussein during the 8-year Iraqi-imposed war on Iran in the 1980s, and later turned its guns on the Iraqi people.