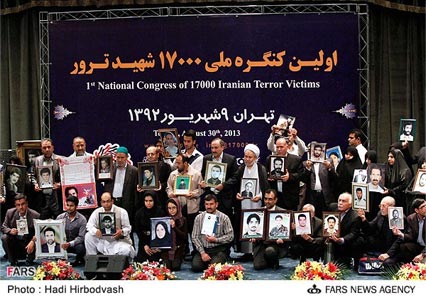 "Iran is one of the biggest victims of terrorism and a real pioneer in fighting it," Alavi told reporters on the sidelines of the 'National Congress of 17,000 Iranian Terror Victims' in Tehran on Saturday.

He warned of the rapid pace of the spread of terrorism in the world, and said some of Iran's neighboring countries are witnessing acts of terror against their innocent people on a daily basis.

In relevant remarks in 2011, a senior Islamic Revolution Guards Corps (IRGC) official blasted the world arrogant powers for their assistance and support for anti-Iran terrorist groups, and described Iran as the biggest victim of terrorist acts in the world.

"The Iranian nation with more than 17,000 martyrs is the biggest victim of terrorism in the world," Supreme Leader's Vice Representative to the IRGC said in the Central city of Qom at the time.

He lambasted the western countries for their support for terrorist groups despite their hues and cries about campaign against terrorism, and said the world arrogant powers equipped terrorist groups against the Islamic Republic on the early days after the Islamic Revolution in Iran, and they are now also striving to save the anti-Iran terrorist Mojahedin-e Khalq Organization (MKO).

The MKO was a long-standing member of the US State Department’s list of terrorist organizations, but after heavy lobbying the group was dropped from the list last year. The group was allied to Saddam Hussein and retains a significant presence at Camp Liberty, and formerly at Camp Ashraf (its main training camp) during the US occupation.

The MKO group, founded in the 1960s, blended elements of Islamism and Stalinism and participated in the overthrow of the US-backed Shah of Iran in 1979. Ahead of the revolution, the MKO conducted attacks and assassinations against both Iranian and Western targets.

The group started assassination of the citizens and officials after the revolution in a bid to take control of the newly-established Islamic Republic. It killed several of Iran's new leaders in the early years after the revolution, including the then President Mohammad Ali Rajayee, Prime Minister Mohammad Javad Bahonar and Judiciary Chief Mohammad Hossein Beheshti who were killed in bomb attacks by MKO members in 1981.