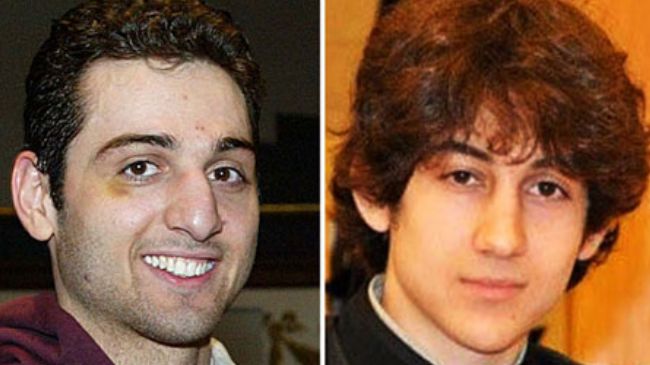 The Boston Globe said of Tsarnaev: “He believed that 9/11 was an inside job and that the government had pulled it off.” The source: Donald Larking, a friend of Tsarnaev and member of the Cambridge, Massachusetts Islamic community.

Why would a Muslim who knew that 9/11 was an anti-Islam PR stunt - and a disaster for Muslims - want to stage another 9/11-style attack on US civilians? (Especially since Islam prohibits attacks on civilians.) Obviously, Muslims, who are aware that 9/11 served the Zionist agenda, benefitted the military-industrial complex, and damaged the cause of Islam, wouldn’t stage such attacks.

Friends of Tamerlan Tsarnaev, including Donald Larking, say Tamerlan was a kind, gentle person. None of the Tsarnaev's family and friends believes Tamerlan or Dzokhar committed the bombing. (Unless we count Uncle Ruslan the CIA asset.)

If Tamerlan had been a violent person, a “freedom fighter,” perhaps he might have attacked one of the Zionist Islamophobes he believed guilty of the slaughter of 3,000 Americans on 9/11. Or if he were a partisan of the Chechen freedom struggle, he might have accepted CIA money to fight against Russia, as so many Chechens have.

But the claim that a 9/11-truth supporting Chechen Muslim would bomb the Boston Marathon is ridiculous on its face. Saying a Chechen freedom-fighter would bomb America is like saying that Charles De Gaulle and the French Resistance would bomb the London subway during World War II.

Sadly, the mainstream media has failed to point out the absurdity of the US government's preposterous and demonstrably false story about what happened at the Boston Marathon. According to the US media - which is largely owned and run by Zionist Islamophobes - Muslims are just violent, irrational individuals who engage in mass murder for no particular reason, against their own interests.

Since the Islamophobic mainstream media is dedicated to portraying Muslims as irrational and violent, it does not even bother to note the insanity of claiming that a Chechen freedom-fighter would bomb the US, a historic supporter of the Chechen struggle. “He was just a crazy Muslim,” the media says. “He would bomb anyone, even the country that supports his cause, because ... well, Muslims just like to kill lots of people in precisely those ways that most damage their cause.”

And if anyone even asks the question, “Who benefits?” the media starts screaming “anti-Semite! Conspiracy theorist!”

The FBI, like the media, is determined to avoid asking the hard questions. That would explain why the FBI showed no interest whatsoever in Tamerlan's 9/11 truth library.

The Boston Globe quoted Tamerlan's neighbor, Harvey Smith, as saying that Tamerlan owned many 9/11 truth publications, some of them gifts from Donald Larking. But according to Smith, the FBI showed no interest in Tamerlan's 9/11 truth material; they carted off all of his Islamic books as “evidence,” but left the 9/11 stuff.

Smith, puzzled by this oversight, told the Globe: “I think it’s interesting the FBI didn’t take them. Maybe it’s because it didn’t fit into their thinking about him.”

Indeed, 9/11 truth publications would not “fit into the FBI's thinking” about Tamerlan. The FBI's whole case is based on the absurd notion - accepted by Americans only due to ignorance and Islamophobia - that Tamerlan's “radical Chechan Muslim” identity would somehow lead him to bomb the country that supported his struggle.

That ridiculous lie might be shoved down the throats of the American people, who know next to nothing about Chechnya, and who have been conditioned by the 9/11 inside job to hate and fear Islam.

But were the FBI to admit that Tamerlan (like his brother Dzokhar) was a 9/11-truth-supporting Muslim, their case might begin to look ridiculous even to the sheeple who graze on mainstream media loco-weed. Even the dumbest American could see that a Muslim who thought 9/11 was an anti-Islam psy-op would be the last person on earth to perpetrate ANOTHER anti-Islam psy-op!

So the FBI left all of Tamerlan's 9/11 truth material in his apartment, assuming it would be lost to history.

But now the mainstream media is publicizing it, possibly in hopes of demonizing the 9/11 truth movement - especially the Muslim-sponsored Million American March Against Fear in Washington DC this coming September 11th.

The media are betting that the American people are too stupid to ask the obvious questions.

They assume that Americans are incapable of searching the Internet and finding the photographs that prove that Craft International, not the Tsarnaevs, perpetrated the Boston bombings.

Are they right? Are Americans really that stupid?

As H.L. Mencken said, “No one ever went broke underestimating the intelligence of the American people.”

Nor have any false-flag terrorists gone to jail for underestimating the intelligence of the American people.

But they say there is a first time for everything.