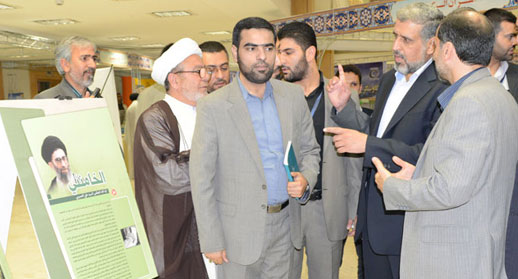 As reported by Habilian Association, in a visit to Habilian's exhibition in Tehran, Dr. Ramadan Abdollah Shalah, the Secretary General of Islamic Jihad Movement in Palestine, met Seyyed Mohammad Javad Hasheminejad, Habilian Association's Secretary General. The exhibition was mainly dedicated to the introduction of Islamic scholars who were martyred through terrorist attacks.

After visiting the exhibition, Dr. Ramadan deplored the crimes conducted by terrorist groups in Iran and referred to the unsuccessful assassination of Ayatollah Khamenei by the terrorist Mujahedin e-khalq organization (MKO, a.k.a MEK and NCRI) and called him the living martyr of Islamic Revolution while pointing at his picture.

Mr. Hasheminejad provided Dr.Ramadn with a brief explanation regarding Habilian Association's activities at the beginning of their meeting.