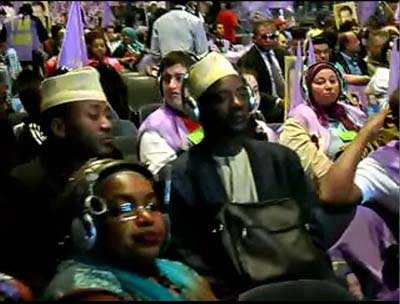 Another year, another June, and another non-Iranian huge rally in Villepinte, Paris. Each year, the terrorist MKO group-let celebrates the anniversary of its armed struggle against its compatriots in June 1981, and claims that tens of thousands of Iranians gather in Villepinte from across Europe. However, last year’s rally was ended up with some recorded films which revealed something contrary to their assertions. The videos showed a great number of peoples from a wide range of nationalities. This time it’s a Kyrgyz student’s turn to spill the beans about the real participants of this gathering.

Alina Alymkulova, who studies Journalism and Mass Communication in Kyrgyzstan, told RFE/RL how she was recruited to travel from Prague to Paris to attend the June 23 rally of the MKO.

“I was in Prague listening to music online and checking news on social media when an advertisement caught my eye. It offered a weekend trip to Paris, a city I always dreamed of visiting at least once during my lifetime.”

“The price was amazingly cheap -- round-trip by bus and bed and breakfast at a four-star hotel would cost me only 35 euros ($46),” she added. “I met many Russians, Ukrainians, Czechs, and students from Asian countries who were all recruited via the Internet.”

Alymkulova went on to describe the hotel they were taken to as a shabby place about 60 Kilometers outside Paris.

The day after that they were taken to the Villepinte to attend what would be expected to be Iranians rally. There, she said, was “the endless sight of buses from many different countries.”

“Security guards checked us as we entered a building. They stopped me because I had kept my camera inside my backpack despite the organizers' warning. Amazingly, the guards let me take my camera in after I paid them a couple of euros. Within seconds I was inside the building.”

This bitter experience of Alina Alymkulova rings a bell. It reminds us of the way MKO recruited members some three decades ago. It reveals that such questionable acts of the group-let are not new, they recruited most of their members through such deceptive offers of job, education and asylum in European countries, and many other measures which are detailed in a 2009 report by RAND Corporation.

The monograph titled “The Mujahedin-e Khalq in Iraq: A Policy Conundrum” deals with the terrorist MKO group and, in part, describes the questionable recruiting behaviors of the terrorist group:

“Once MKO settled in Iraq and fought against Iranian forces in alliance with Saddam, the group incurred the ire of the Iranian people and, as a result, faced a shortfall in volunteers. Thus began a campaign of disingenuous recruiting. The MeK naturally sought out Iranian dissidents, but it also approached Iranian economic migrants in such countries as Turkey and the United Arab Emirates with false promises of employment, land, aid in applying for asylum in Western countries, and even marriage, to attract them to Iraq. Relatives of members were given free trips to visit the MeK’s camps. Most of these “recruits” were brought into Iraq illegally and then required to hand over their identity documents for “safekeeping.” Thus, they were effectively trapped.”

Now the question arises that how, for God’s sake, MKO can bring democracy and freedom, while it is itself a cult with cult-like practices, for a country which already has freedom and democracy, and why some European and US former and current politicians speak in favor of such a cult in exchange for money.