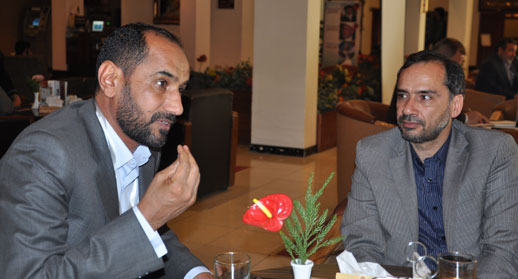 “Despite there are numerous documents that prove Mujahedin e-khalq organization’s crimes against the people of Iraq, the Iraqi government has only agreed with expulsion of the group.” Said a member of Iraqi national alliance in a meeting with Seyyed Mohammad Javad Hasheminejad, Habilian Association’s Secretary General.

Al-Otvani referred to Iraqi people’s view on the government’s measures against the terrorist group and said: “According to the constitution, the government tried to expel the group from the country. But people believe the government has had too much flexibility towards the cult’s members and that’s because it is satisfied with their expulsion only, despite there are many documents showing their crimes against people.

He also pointed out the USA’s ongoing pressures to keep the MKO in Iraq and said: “the government has tolerated a lot of pressures from the US regarding to the MKO’s expulsion. The United States aims to tense relations between the two Iraqi and Iranian nations by doing that.”

At the end of the meeting he predicted that the terrorist cult will be disintegrated by being expelled to the western countries and said: “Iraq is a member of the resistance movement and that’s impossible for the terrorist group to exist in such a country.”