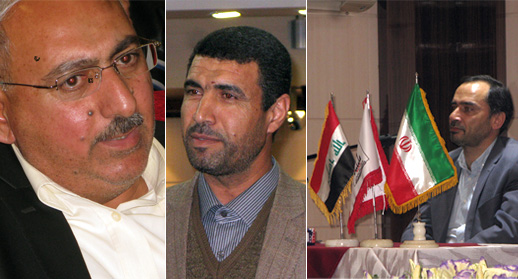 Referring to the U.S. role in the region’s instabilities, Seyyed Mohammad Javad Hasheminejad addressed the recent developments in the region and threats facing the nations in a friendly meeting with a delegation of Iraqi university Professors and scholars and said: “After the new Iraqi government came to power, the Americans found the developments in Iraq against their will and started to support and enhance terrorist groups to destroy the country’s security, they promoted the very same thing they had apparently came to fight.”

Habilian’s Secretary General added: “One of the most destructive terrorist groups in Iraq is Mujahedin e-Khalq organization. As though the group is acknowledged by the USA and other western countries as the sample of murder and crime and it is hated by Iraqi and Iranian nations since it has assassinated many innocent people in both countries, the United States is MEK’s most prominent supporter in Iraq.”

After Hasheminejad’s speech, Ali Abood Ne’emeh, a member of the Iraqi delegation, pointed out recent Islamic movements and said: “We believe the Islamic movements in Lebanon, Palestine, Iraq,… wouldn’t have succeeded without Islamic Republic of Iran’s help and support and we have to thank you for this. We also appreciate our leaders who had a very impressive role in the movement of people.

Dr. Rashid Hussein, a university professor in Iraq, referred to the deep, ancient ties between Iran and Iraq and said:” Of course sometimes foreign factors cause problems for the ties between the two countries, but whenever these foreign factors are removed, the ties will be normal again.”

In another part of his speech he addressed the Imperial governments’ wickedness and stated: “The conspiracy of imperial governments is too obvious in the region and it has always existed. What is now happening in the Islamic Wakening countries is a good proof for this. These are due to foreign and imperial intervention.

Dr. Hussein added: “The Iraqi people don’t ever tolerate the MEK, but unfortunately some Iraqi officials and the United States back the group and want them to stay in Iraq for a while.”

He pointed out the American propaganda and said: “We know what the USA is seeking in the world. But unfortunately they are using their propaganda machines and false advertisement to claim they have come to Iraq for Human Rights. They can easily promote themselves since the media is at their disposal.”

At the end Dr.Rashid Hussein appreciated Habilian Association’s activities and included: “We are very happy to see NGOs are so active in Iran and hope we can use Iran’s experience in this field in our country. We are still at the beginning in Iraq. It is such a useful experience. Specifically about Habilian, it is so nice to support families of the people who have sacrificed themselves for your country. This would encourage Iranian people for further sacrifices in the future.”