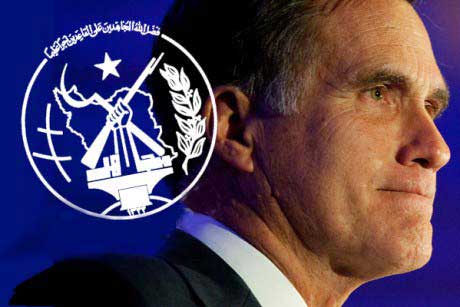 Ivan Sascha Sheehan takes to the pages of Haaretz to offer the worst campaign advice anyone could give Mitt Romney:

The Romney camp’s recent expressions of support for the organized resistance challenging Syrian President Bashar Assad should now be followed with a similar approach to the Iranian opposition’s Mujahideen-e-Khalq or MEK, the largest movement in the National Council of Resistance of Iran.

The rest of the op-ed is the usual pro-MEK song and dance, and it is misleadingly titled “Romney should embrace the Iranian opposition.” Of course, the actual Iranian opposition in Iran loathes the MEK, and it rejects the idea that the MEK speaks for opponents of the current Iranian leadership. The MEK is still listed as a foreign terrorist organization, but that hasn’t stopped its American cheerleaders from spending the last several years to get that designation removed. Romney would be out of his mind to take Sheehan’s advice, but the possibility isn’t as far-fetched as it seems.

It’s true that one of Romney’s advisers reportedly lost influence inside the campaign because of his shilling for the MEK, but that reflected Romney’s displeasure with the adviser’s lack of discipline and not an objection to the substance of what Reiss was doing. One of Romney’s more prominent supporters and possible future appointees, John Bolton, has repeatedly spoken in support of the MEK and has attended MEK rallies. It’s not out of the question that Romney might just be foolish enough to lend some support to the group.

Thanks to the American lobbying effort on behalf of the MEK, Romney would not be on his own. He could point to all of the former government officials and retired military officers that have been advocating for the terrorist group, and he could correctly claim that the lobbying effort for the MEK has been a bipartisan one. Backing the MEK would be disgraceful and unwise, and it would confirm for almost all Iranians that Romney is hostile to Iran as a nation and not just to its current government. Considering Romney’s other foreign policy positions, it sounds like just the sort of thing he would do.