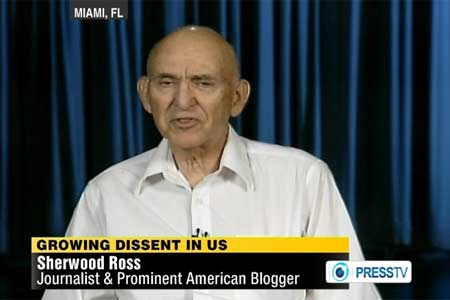 In a phone interview with Press TV’s U.S. Desk on Sunday, Ross noted that “there are no good terrorist anywhere”.

“In my book, there is no terrorist who’s a good terrorist whether a terrorist by assassination from drone planes or whether it’s a terrorist blowing up a building or a destroyer … there can’t be good or bad terrorists.”

He said those who kill “Iranian nuclear scientists are terrorists, they’re criminals, they’re killers and the terrorists who blew up the destroyer (USS) Cole when they had the opportunity are in similar condition.”

Investigative reporter Seymour Hersh reported on April 6th that the Pentagon trained members of a terrorist group, MEK, who later returned to Iran and may have engaged in covert activities.

The group, also known as MKO, had been listed in 1997 as a foreign terrorist organization by the U.S. State Department, and still remains on that list.

Five Iranian nuclear scientists have been assassinated over the past few years. Iran blames the U.S. and Israel for playing a key role in an assassination campaign that has targeted Iranians scientists. Tehran says the efforts intend to impede Iran’s progress in its nuclear energy program. The West suspects that Iran may be after nuclear arms, a claim Tehran firmly rejects.