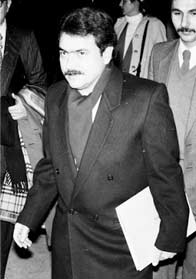 According to Habilian’s report, one of the former members of terrorist Mujahedin-e Khalq group who has spent two decades of his life at Camp Ashraf said that Masoud Rajavi (MKO’s ringleader) is afraid of his own shadow and thinks that those around him are Iranian infiltrators until proven otherwise.

“This illusion weighs him down too much so that his life becomes a living hell,” he said. “They are frequently torture those members who are suspicious of.”

“As long as he was at Camp Ashraf, Rajavi was afraid of being killed,” said the former MKO member, adding that now that he is hidden he fears that internal information of his cult be exposed by an infiltrator.

The defected member continued that one of the main reasons for hiding himself was these tormenting delusions that he no longer dared to remain at Camp Ashraf and went into hiding.

He went on to say that he was also tortured during his last years at Camp Ashraf, since “Rajavi thought that I was linked to the Islamic Revolutionary Guards Corps (IRGC)”.

Following the American invasion of Iraq, Masoud Rajavi mysteriously disappeared from public view in 2003, presumably fearing retaliation following the collapse of Saddam Hussein's regime and subsequent loss of protection for him and his followers. No evidence has emerged as to his involvement in the radio messages he frequently sends to his followers.