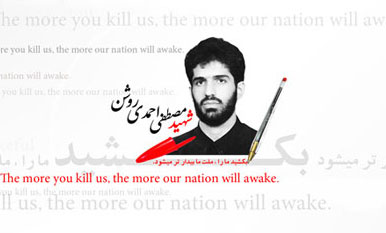 Another Iranian scientist, Dariush Rezaeinejad, was also assassinated through the same method on 23 July 2011.

The following is the full text of the Iranian students' letter:

In the name of God

We are writing this letter in order to condemn the terrorist acts of the secret intelligence services of the Unites States of America and Israel.

As you are well aware since two years ago, five Iranian nuclear scientists have been assassinated resulting in the death of 4. In those terror acts the Israeli intelligence service, practically, confirmed its participation and its footprints in the last one on Jan 11-2012 was clearly obvious.

Now we raise this question before the eye's of the world: what was the Iranian nuclear scientists' fault and in general what is the Iranian nation's fault?

Is it problematic to have peaceful nuclear energy under the observance of the International Atomic Energy Agency? Is the will of a nation to gain science and knowledge considered as a crime?

Is dependability of a nation on their own scientists and young researchers to improve and progress to the highest horizons of advancement a mistake?

The oppressed people of Iran, during the last 30 years have been the target of vast varieties of conspiracies by the Imperialism of America and international Zionism, In addition in the last decade and after the false accusation of western countries in the case of so called "Iran's nuclear file", they have been under extreme pressures such as conducting unlawful and unnecessary sanctions by American and their European allies to terrorize and physical removal of Iranian scientists in the center of the capital, Tehran.

There exists this question: Why these sorts of actions are being promoted against the Islamic Republic of Iran? The answer is crystal clear: standing against international Zionism and hegemony of the United States of America, has made Iranian eligible for various types of pressures. Here is another serious question: How long these blindfolded and stupid actions will last? Are international organizations like the United Nation and other similar international organizations willing to keep their silence?

In the mid November of 2011, the UN issued a resolution condemning the theory of the terror of Saudi ambassador to America (a false accusation by Americans and Saudis to create more pressure on Iran) which has never took place and was basically suspicious. Here is the paradox, what human right makes it lawful to terrorize innocent Iranians?

Why international organizations during the past years when American supporting terrorist groups like "Jundollah" terrorizing the innocent Iranian people, didn't show any reaction?

Why United Nation and its Security Council as the highest resource of international affairs didn't have and yet does not have any reaction toward these hideous terrors?

Paradoxical standards of international organizations regarding the issuance of unjustified resolutions against the Iranian people and implementing sanctions against them, do not condemning and not preventing terrorist acts against our nation, is clearly reflecting the fact that these organizations are not only being independent but also they are a machines in the hands of super powers to create more force on our nation who are seeking their own independence and liberty.