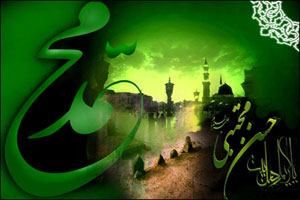 28 Safar marks the sad demise of Holy Prophet Muhammad and martyrdom of his elder grandson, Imam Hassan Mujtaba. On this occasion a short biographical overview of the two noble characters will be given here.

Prophet Muhammad the last prophet and messenger of God

The last prophet of God is Hadrat-i Muhammad - upon whom be blessings and peace - who possesses a book and a Shari’ah and in whom Muslims have placed their faith. The Prophet was born fifty three years before the beginning of the hegira calendar in Mecca in the Hijaz amidst the family of Bany Hashim of the Tribe of Quraysh, who were considered the most honored of the Arab families.

His father was called ’Abdallah and his mother, Aminah. He lost both parents at the beginning of childhood and was placed under the care of his paternal grandfather, ’Abd al-Muttalib, who also soon passed away. At this time the Prophet’s uncle, Abu Talib, took charge of him and became his guardian, taking him into his own house.

The Prophet had not received any schooling and therefore did not know how to read and write. Yet, after reaching the age of maturity he became famous for his wisdom, courtesy, and trustworthiness. As a result of his sagacity and trustworthiness, one of the women of the tribe of Quraysh, well-known for her wealth, appointed him as the custodian of her possessions and left in his hands the task of conducting her commercial affairs.

The Prophet once journeyed to Damascus with her merchandise and as a result of the ability he displayed was able to make an outstanding profit. Before long she asked to become his wife and the Prophet accepted her proposal. After the marriage, which occurred when he was twenty-five years old, the Prophet began the life of a manager of his wife’s fortunes, until the age of forty, gaining meanwhile a widespread reputation for wisdom and trustworthiness. He refused, however, to worship idols, as was the common religious practice of the Arabs of the Hijaz. And occasionally he would make spiritual retreats (khalwah) in which he prayed and discoursed secretly with God.

At the age of forty, in the cave of Hira’, in the mountains of the Tihamah region near Mecca, when he was in spiritual retreat, he was chosen by God to become a prophet and was given the mission of propagating the new religion. At that moment the first chapter of the Quran ("The Blood-Clot" [Surah-i ’alaq]) was revealed to him.

The idol-worshippers of Mecca, although at the beginning they considered inflicting all kinds of pressures and tortures such as striking and beating, insult, ridicule and defamation on the Prophet, occasionally would also show kindness and courtesy toward him in order to have him turn away from his mission.

They would promise him great sums of money or leadership and the rule of the tribe. But for the Prophet their promises and their threats only resulted in the intensification of his will and determination to carry out his mission. Once, when they came to the Prophet promising him wealth and power, the Prophet told them, using metaphorical language, that if they were to put the sun in the palm of his right hand and the moon in the palm of his left hand he would not turn away from obeying the unique God or refrain from performing his mission.

About the tenth year of his prophecy, Abu Talib, his uncle as well as his sole protector, died as did also his devoted wife. Henceforth there was no protection for his life nor any place of refuge. Finally the idol-worshippers of Mecca devised a secret plan to kill him. At night they surrounded his house from all sides with the aim of forcing themselves in at the end of the night and cutting him to pieces while he was in bed. But God, the Exalted, informed him of the plan and commanded him to leave for Yathrib. The Prophet placed Ali in place of himself in his bed and at night left the house under the Divine protection, passing amidst his enemies, and taking refuge in a cave near Mecca. After three days when his enemies, having looked everywhere, gave up hope of capturing him and returned to Mecca, he left the cave and set out for Yathrib.

The people of Yathrib, whose leaders had already accepted the message of the Prophet and sworn allegiance to him, accepted him with open arms and placed their lives and property at his disposal. In Yathrib for the first time the Prophet formed a small Islamic community and signed treaties with the Jewish tribes in and around the city as well as with the powerful Arab tribes of the region.

He undertook the task of propagating the Islamic message and Yathrib became famous as "Madinat al-rasul" (the city of the Prophet).

After ten years of stay in Medina on June 8, 632 the Prophet fell ill and died after a few days of illness. According to existing traditions the last words on his lips were advice concerning slaves and women.

Imam Hassan was born in the year 3 A.H. in Medina and shared in the life of the Prophet for somewhat over seven years, growing up during that time under his loving care. After the death of the Prophet which Imam Hassan was placed directly under the care of his noble father. After the death of his father, through Divine Command and according to the will of his father, Imam Hassan became Imam; he also occupied the outward function of caliph for about six months, during which time he administered the affairs of the Muslims. During that time Mu’awiayh, who was a bitter enemy of Ali and his family and had fought for years with the ambition of capturing the caliphate, first on the pretext of avenging the death of the third caliph and finally with an open claim to the caliphate, marched his army into Iraq, the seat of Imam Hassan’s caliphate. War ensued during which Mu’awiyah gradually subverted the generals and commanders of Imam Hassan’s army with large sums of money and deceiving promises until the army rebelled against Imam Hassan.

Finally, the Imam was forced to make peace and to yield the caliphate to Mu’awiyah, provided it would again return to Imam Hassan after Mu’awiyah’s death and the Imam’s household and partisans would be protected in every way.

In this way Mu’awiyah captured the Islamic caliphate and entered Iraq. In a public speech he officially made null and void all the peace conditions and in every way possible placed the severest pressure upon the members of the Household of the Prophet and the Shi’ah. During all the ten years of his imamate, Imam Hassan lived in conditions of extreme hardship and under persecution, with no security even in his own house.

In the year 50 A.H. he was poisoned and martyred by one of his own household who, as has been accounted by historians, had been motivated by Mu’awiyah.

In human perfection Imam Hassan was reminiscent of his father and a perfect example of his noble grandfather. In fact, as long as the Prophet was alive, he and his brother were always in the company of the Prophet who even sometimes would carry them on his shoulders. Both Sunni and Shi’ite sources have transmitted this saying of the Holy Prophet concerning Hasan and Husayn: "These two children of mine are Imams whether they stand up or sit down" (allusion to whether they occupy the external function of caliphate or not).