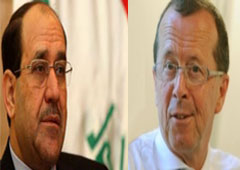 Iraqi Prime Minister Nouri al-Maliki discussed the necessity of evacuating the MKO’s Camp Ashraf by the end of this year with the new UN envoy to Iraq, according to a Premiership statement.

The statement, copy of which received by Aswat al-Iraq, added that Maliki expressed his full support of the UN mission in Iraq to Martin Kobler.

Both sides discussed joint matters, especially the evacuation of Camp Ashraf and the necessity to implement Iraqi Cabinet resolution on this matter.

Iraqi government issued a final resolution to end the presence of the anti-Iran Mujahedin-e Khalq Organization (MKO) would be the end of 2011, because it is a terrorist organization that participated in killing the Iraqi people.

The MKO members are stationed in Camp Ashraf in Diyala Province since it moved its headquarters in 1985.

Kobler said he will continue UN work in full coordination with the Iraqi government according to UN Security Council resolution.

He stressed that the UN prepared a paper containing its vision of the situation in Iraq till 2015, where "the situation proved to be with the ambitions of the paper", as the statement said.