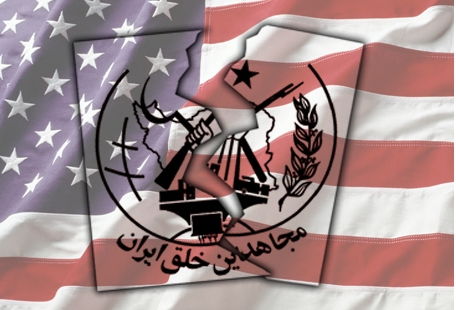 In a 2009 report, Rand, a non-profit Washington think-tank, called the Mujahedin-e Khalq Organisation (MEK, aka MKO, PMOI) a "cult" and "skilled manipulators of public opinion".

The group carried out many attacks inside Iran after the 1979 revolution, and allied itself with Saddam Hussein's Iraq against Tehran during the 1980s.

In recent months, though, a series of heavyweight political and military figures in the US have spoken out in favour of the MEK, calling explicitly for the group to be taken off the list of banned organisations.

They include high-profile former US government officials, politicians and retired military officers, often hired to speak for fees beginning at $20,000 a time.

However, one US government official told the BBC that the MEK "trawls the halls of Congress" for support, something he described as "highly unusual" for a banned organisation.

MEK supporters operate through dozens of groups, some of which have placed costly full-page advertisements in The New York Times and Washington Post, and hired powerful Washington DC lobbying firms.

A spokesman for one firm, Akin Gump Strauss Hauer & Feld, denied that the company represented the MEK, but said it does lobby on behalf of a group called the Iranian-American Community of Northern California.

Among those who have spoken out in favour of the MEK include former Attorney General Michael Mukasey, former UN ambassador John Bolton and former Homeland Security Secretary Tom Ridge.

Howard Dean, a former Democratic presidential hopeful, has gone further, calling on the US government to recognise Maryam Rajavi, the leader of the group, as the legitimate president of Iran.

Speaking to the BBC, Mr Mukasey defended his position, saying there was "no evidence of [the MEK] being involved in any terrorist activity in the last 10 years".

Mr Bolton took a similar line, describing the decision to keep the MEK on the banned list as "a political act" and saying that taking payment for speaking was absolutely normal in the US.

'Held against their will'

However, not everyone in Washington is as relaxed about the MEK's lobbying.

Elliot Abrams, an adviser to the White House under former President George W Bush, was also invited to speak at an MEK event, but chose not to attend.

"Everyone is free to debate whether MEK should or should not come off the list, but as we speak they are still on the terrorist list. So frankly, taking money from them to speak in support is worrying," he told the BBC.

Reza Marashi, a former state department official, told the BBC he doubted that the group had any support within the US government.

"There is ample classified information that shows the group remains a terrorist organisation. De-listing them would signal that the US does not have a consistent policy towards terrorism," he said.

The Iraqi government wants the group out of Iraq and has recently clashed with the inhabitants of the camp. MEK supporters say the US troop withdrawal from Iraq is leaving the group defenceless in a hostile country.

But many blame the leadership of the MEK for the predicament facing the residents of Camp Ashraf.

In 2005 a Human Rights Watch Report reported that 70% of Ashraf residents were held there against their will, and accused the MEK of torturing its own members.

Ali Safavi, a member of the political wing of the MEK, has admitted to the BBC that all the members in the camp have ended their marriages and are staying celibate.

Opponents of the MEK warn of the possible fallout if the group is de-listed.