http://www.nytimes.com/2011/08/14/opinion/sunday/an-iranian-cult-and-its-american-friends.html?_r=1Elizabeth Rubin is a contributor to The New York Times Magazine, where her article "The Cult of Rajavi" appeared in July 2003.

A FEW weeks ago I received an e-mail from an acquaintance with the subject line: Have you seen the video everyone is talking about?

I clicked play, and there was Howard Dean, on March 19 in Berlin, at his most impassioned, extolling the virtues of a woman named Maryam Rajavi and insisting that America should recognize her as the president of Iran.

Ms. Rajavi and her husband, Massoud, are the leaders of a militant Iranian opposition group called the Mujahedeen Khalq, or Warriors of God. The group’s forces have been based for the last 25 years in Iraq, where I visited them shortly after the fall of Saddam Hussein in April 2003.

Mr. Dean’s speech stunned me. But then came Rudolph W. Giuliani saying virtually the same thing. At a conference in Paris last December, an emotional Mr. Giuliani told Ms. Rajavi, “These are the most important yearnings of the human soul that you support, and for your organization to be described as a terrorist organization is just simply a disgrace.” I thought I was watching The Onion News Network. Did Mr. Giuliani know whom he was talking about?

Evidently not. In fact, an unlikely chorus of the group’s backers — some of whom have received speaking fees, others of whom are inspired by their conviction that the Iranian government must fall at any cost — have gathered around Mujahedeen Khalq at conferences in capitals across the globe.

Indeed, the Rajavis and Mujahedeen Khalq are spending millions in an attempt to persuade the Obama administration, and in particular Secretary of State Hillary Rodham Clinton, to take them off the national list of terrorist groups, where the group was listed in 1997. Delisting the group would enable it to lobby Congress for support in the same way that the Iraq Liberation Act of 1998 allowed the Iraqi exile Ahmad Chalabi to do.

Mrs. Clinton should ignore their P.R. campaign. Mujahedeen Khalq is not only irrelevant to the cause of Iran’s democratic activists, but a totalitarian cult that will come back to haunt us.

When I arrived at Camp Ashraf, the base of the group’s operations, in April 2003, I thought I’d entered a fictional world of female worker bees. Everywhere I saw women dressed exactly alike, in khaki uniforms and mud-colored head scarves, driving back and forth in white pickup trucks, staring ahead in a daze as if they were working at a factory in Maoist China. I met dozens of young women buried in the mouths of tanks, busily tinkering with the engines. One by one, the girls bounded up to me and my two minders to recite their transformations from human beings to acolytes of Ms. Rajavi. One said she had been suicidal in Iran until she found Ms. Rajavi on the Internet.

At Camp Ashraf, 40 miles north of Baghdad, near the Iranian border, 3,400 members of the militant group reside in total isolation on a 14-square-mile tract of harsh desert land. Access to the Internet, phones and information about the outside world is prohibited. Posters of Ms. Rajavi and her smiling green eyes abound. Meanwhile, she lives in luxury in France; her husband has remained in hiding since the United States occupied Iraq in 2003. 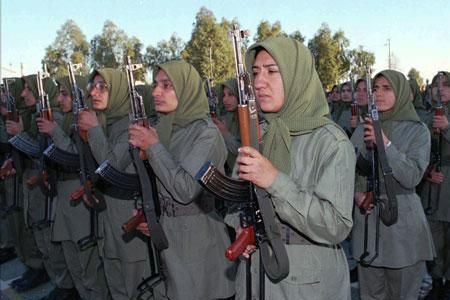 During the Iraq-Iran war in the 1980s, the group served as Mr. Hussein’s own private militia opposing the theocratic government in Tehran. For two decades, he gave the group money, weapons, jeeps and military bases along the border with Iran. In return, the Rajavis pledged their fealty.

In 1991, when Mr. Hussein crushed a Shiite uprising in the south and attempted to carry out a genocide against the Kurds in the north, the Rajavis and their army joined his forces in mowing down fleeing Kurds.

Ms. Rajavi told her disciples, “Take the Kurds under your tanks, and save your bullets for the Iranian Revolutionary Guards.” Many followers escaped in disgust.

So the Rajavis then began preying on Iranian refugees and asylum seekers in Europe to fill their ranks. The Rajavis promise them salaries, marriage, family, freedom and a great cause — fighting the Iranian government. Then the unwitting youths arrive in Iraq.

What is most disturbing is how the group treats its members. After the Iraq-Iran war, Mr. Rajavi orchestrated an ill-planned offensive, deploying thousands of young men and women into Iran on a mass martyrdom operation. Instead of capturing Iran, as they believed they would, thousands of them were killed, including parents, husbands and wives of those I met in Iraq in 2003.

After my visit, I met and spoke to men and women who had escaped from the group’s clutches. Many had to be deprogrammed. They recounted how people were locked up if they disagreed with the leadership or tried to escape; some were even killed.

Friendships and all emotional relationships are forbidden. From the time they are toddlers, boys and girls are not allowed to speak to each other. Each day at Camp Ashraf you had to report your dreams and thoughts.

If a man was turned on by the scent of a woman or a whiff of perfume, he had to confess. Members had to attend weekly ideological cleansings in which they publicly confessed their sexual desires. Members were even forced to divorce and take a vow of lifelong celibacy to ensure that all their energy and love would be directed toward Maryam and Massoud.

Mr. Hamilton and Generals Jones and Clark have been paid speakers’ fees by front groups for Mujahedeen Khalq and have spoken in support of the group in public conferences. They claimed ignorance of how the group treated its members.

“I don’t know a lot about the group,” Mr. Hamilton told me over the phone last week. But in 1994, when he was chairman of the House Foreign Affairs Committee, Mr. Hamilton received a report describing the group as a violent cult with a distinct ideology synthesizing Marxism and messianic Shiism.

At a February conference in Paris, Mr. Dean praised the group’s extraordinary “bill of rights.” And General Jones said to Ms. Rajavi: “It is time for those of us from the United States who have come to know and admire you and your colleagues and your goals to do what is required to recognize the legitimacy of your movement and your ideals.” When I asked General Jones last week if he knew that some considered the group a totalitarian cult, he replied, “This is the first time I’ve heard anything about this.”

He said he’d checked with military and F.B.I. officials. “I wanted to make sure we weren’t supporting a group that was doing nefarious things that I don’t know about,” he said. “Nobody brought it up, so I didn’t know what questions to ask.”

IN fact, a 2004 F.B.I. report on the group detailed a joint investigation by the American and German police, which revealed that the group’s cell in Cologne, Germany, had used money from a complex fraud scheme to buy military equipment. The group used children with multiple identities to claim multiple benefit checks from the German government. Evidence also showed that the group had obtained money in Los Angeles to purchase GPS units to increase the accuracy of planned mortar attacks on Tehran.

They are right that we should have compassion for those trapped inside the camp. A 2009 RAND Corporation study found that at least 70 percent of the group’s members there were being held against their will. If the group’s American cheerleaders cared for those at the camp half as much as they did for the Rajavis, they would be insisting on private Red Cross visits with each man and woman at Camp Ashraf.

American officials who support the group like to quote the saying, “The enemy of my enemy is my friend.” By this logic, the group’s opposition to the Tehran theocracy justifies American backing. But there is another saying to consider: “The means are the ends.”

By using the Mujahedeen Khalq to provoke Tehran, we will end up damaging our integrity and reputation, and weaken the legitimate democracy movement within Iran.

As a senior State Department official told me, “They are the best financed and organized, but they are so despised inside Iran that they have no traction.” Iranian democracy activists say the group, if it had had the chance, could have become the Khmer Rouge of Iran.

“They are considered traitors and killers of Iranian kids,” said the official, who spoke on the condition of anonymity because the Mujahedeen Khalq’s status on the terrorist list is under review. “They are so unpopular that we think any gesture of support to them would disqualify and discredit us as being interested in democratic reform.”

If the group is taken off the terrorist list, it will be able to freely lobby the American government under the guise of an Iranian democracy movement.

Recent history has shown that the United States often ends up misguidedly supporting not only the wrong exile groups in the Middle East, but the least relevant ones. We cannot afford to be so naïve or misguided again.

Elizabeth Rubin is a contributor to The New York Times Magazine, where her article "The Cult of Rajavi" appeared in July 2003.