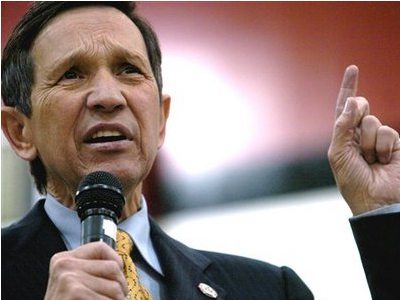 I am writing to express my concern over reports about the investigation that the Department of Justice has been conducting of anti-war activists in several cities including Minneapolis and Chicago. I do not want to interfere in your investigation in any way, but there are two aspects of it that cause me great concern. I am hoping that your answers to my questions will resolve my concerns.

The first aspect is that the investigation appears to have begun, as early as April of 2008, with the assignment of an undercover agent to infiltrate the meetings of anti-war groups and individuals who were planning protests and demonstrations at the Republican National Convention in Minneapolis that summer. The introduction of an undercover agent into meetings of anti-war groups would normally be cause for concern in isolation, but it is especially worrisome in the context of other efforts during the previous administration to stifle legitimate anti-war dissent including, as disclosed last month, that the Bush White House had asked the CIA to investigate Juan Cole, a University of Michigan professor who was a strong critic of the Iraq War. Why was an undercover agent assigned to infiltrate groups that were planning peaceful protests at the Republican National Convention? And, if the justification for that assignment was to determine whether any violent activities were being planned, why was that undercover operation continued after the Convention was over?

The second aspect is that the focus of the investigation appears to be whether these small, local groups have somehow provided "material support or resources" to foreign terrorist organizations. This suggestion defies credibility. What possible "material support or resources" could these small, local groups provide to foreign terrorist organizations? And, what contacts could they have conducted that would justify an investigation in which seven houses were searched and 23 individuals were subpoenaed to testify before a grand jury?

The statute that prohibits "material support or resources" to foreign terrorist organizations is very broad and unclear. It has been amended several times in response to judicial decisions that have found its provisions to be unconstitutionally vague or overbroad. While the Supreme Court provided some guidance in Holder v. Humanitarian Law Project, that clarification did not exist until June 21, 2010.

Holder clarified the scope of conduct that could be prosecuted under the statute. However, almost 90% of the time period subject to your investigation occurred prior to that clarification. During those 26 months, the controlling legal authorities included the 2007 and 2009 decisions of the Ninth Circuit Court of Appeals in Humanitarian Law Project v. Mukasey, which did not allow prosecution of individuals who provided "training," or "expert advice or assistance," or "service" to those organizations. If that is the nature of the conduct that you are investigating, is it fair to bring criminal charges for acts that were viewed by some courts as lawful at the time they were committed?

One of the biggest problems with vague criminal statutes is the opportunity they provide for differential enforcement. The Washington Post and other news sources have reported that former Attorney General Michael Mukasey, former Homeland Security Director Tom Ridge, former White House security adviser Frances Townsend, and former New York Mayor Rudy Giuliani have publicly expressed their support for the Mujaheddin-e-Khalq (MEK), an organization that has been on the foreign terrorist list of the State Department since 1997. They spoke in support of the MEK, in Paris last December, at a rally organized by an international group that lobbies for the MEK. Can their public advocacy truly be "independent," within the meaning of the Holder decision, if it is solicited by an organization that lobbies for the MEK?

I fully support their constitutional rights to express their opinions on this issue and any others. But, I don't understand why their support of a foreign terrorist organization goes unchallenged by law enforcement, while anti-war activists are targeted with FBI searches and grand jury subpoenas. Is there any distinction that justifies the different treatment of these two groups other than the fact that one of them is composed of prominent people who support the wars conducted by two successive administrations and the other is composed of ordinary people who do not?

It has been reported recently that "the MEK has spent millions of dollars on lobbyists, PR agents and communications firms to build up pressure on Secretary Hillary Clinton to take the group off of the terrorist list." In Holder, the Department of Justice, under both your direction and that of Attorney General Mukasey, argued that it was a felony to file an amicus brief on behalf of a foreign terrorist organization, or even to engage in public advocacy on behalf of such an organization, unless that advocacy was totally "independent" of the organization. How do you reconcile those arguments with the total absence of attention paid to lobbying activities in support of the MEK? How do you reconcile that inaction with the apparent overkill that had been directed at the anti-war activists in Minneapolis and Chicago?

A federal prosecutor has tremendous power and resources. Because of that, he has a concomitant obligation to exercise that power with judgment and discretion. Is it good judgment to direct the overwhelming resources of the federal government onto small, local groups and individuals whose primary interest is peace? Is it good judgment to investigate them under a vague and broad statute whose text and interpretations have changed numerous times over the past decade? Is this really the best use of Department of Justice personnel?