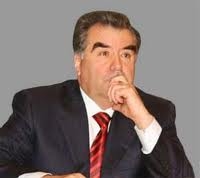 "Terrorism has trans-national aspects, therefore every country should work to root it out," Rahmon stressed, addressing an international conference on terrorism here in Tehran on Saturday.

"Today, we are witnessing a national and international determination in the campaign against terrorism," Rahmon added.

He further warned that terrorism has now targeted security, stability and growth of countries, and called on the international community to find proper ways to block financial resources of the terrorist groups, including drug-trafficking activities.

The International Conference on Global Fight against Terrorism officially started work here in Tehran on Saturday with several high-ranking officials and international figures in attendance.

The event has brought together senior officials from at least 60 countries, and representatives from several international organizations including the UN.

Presidents of Sudan, Pakistan, Afghanistan, Tajikistan and Iraq as well as senior dignitaries and officials from different world states and world bodies have attended the conference.

The chief executives of a number of states, including the Armenian president, are also due to join the conference tomorrow.

The event, arranged under the slogan of "A World http://english.farsnews.com/newstext.php?nn=9004045021without Terrorism", is aimed at increasing international convergence and coordination in fighting terrorism.