After the failed project of soft overthrowing of Islamic Republic of Iran during 2009 post election, American Foundation for Defense of Democracies (FDD) put forward “The government in exile” project.

The project was consistent of some notorious Iranian opposition elements abroad, and it was administrated by “Dennis Ross”, Barack Obama’s pro-Zionist former Middle East envoy and his current advisor.

For objectification of “The government in exile”, a figure with social- religious background was required.

Soon, American Intelligence services identified this person, Mohammad Reza Madhi, a former revolutionary figure who, at that time, was engaged in diamond trade in Bangkok and had been for years monitored by the U.S embassy. Soon after the identification, the US ambassador to Bangkok was sent to Madhi and after a few times of resistance, Madhi was finally won over to take part in the US new plot of “The government in exile”.

After the primitive agreements Madhi was sent to Saudi Arabia so as to meet The U.S Secretary of State Hillary Clinton at the presence of Saudi Arabia FM Saud al-Faisal. In this meeting Madhi who boasted being supported by thousands of security as well as military officials inside the country, accepted to raise a new Fitna inside the country in alliance with the U.S.

Calling himself the founder and also secretary General of the so-called “Jam-e Yaran (Friends Assembly) movement”, comprising of military and security personnel inside the Islamic Republic, Madhi was flown to Washington in order to meet Joe Biden, Vice president of the U.S. 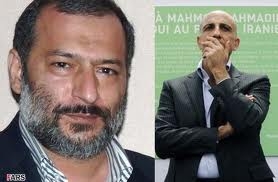 In the early stages of the project, Madhi, who was considered as a master ring of “The government in exile”, started a Triple Alliance with Mehrdad Khansari (monarchist head of a research center in London affiliated to MI6) and Amir Hussein Jahanshahi (a Mossad agent who had received 9 years of soft overthrowing trainings in Israel for the project. Jahanshahi is an Iranian capitalist with French- Israel citizenship, whose father had close ties to Pahlavi regime, Ashraf Pahlavi in particular. Jahanshahi was the chairman of a so-called “Green wave”).

Based on the report, after formation of “The government in exile” was declared, its members, budgeted by America's $ 7 billion in aid, formally became united, but, before the last step of running the U.S commands, Madhi, infiltrated agent of Islamic Republic of Iran, who was ordered to travel to Israel and take up position in Seclon garrison, was rescued and returned to Iran. So the project was defeated right at the beginning.