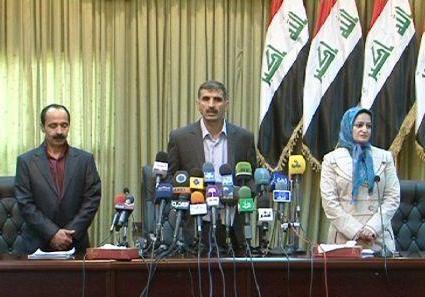 A Mujahedin-e Khalq Organization (MKO) defector says any member of the terrorist group who wishes to leave has no choice but to commit suicide with a cyanide pill.

Speaking at a press conference at the Iraqi Defense Ministry in Baghdad on Tuesday, former MKO member Maryam Sanjabi said, “When I was appointed as a senior member of the MKO leadership council, I was told that I could never leave the organization. Otherwise, I had to kill myself by taking a cyanide pill.

“It is a custom within the organization to exterminate its defectors. Such a measure on occasions has been emphasized by [MKO leader] Massoud Rajavi. Two members of the MKO leadership council were killed some 2 years ago when they wanted to desert the organization.”

“Even some members of MKO leadership council are currently held in captivity in Camp Ashraf because they have sought to defect. MKO members are afraid to disclose what is happening to them for fear of their lives.”

Having lived in misery and under pressure for many years, Sanjabi surrendered herself to the Iraqi forces deployed near the camp last week. "None of the residents of Camp Ashraf have the right to contact their families... The only thing that can separate a member from the MKO is death," she said.

"The leaders of the camp have spent millions of dollars to train the residents of the camp on how to launch attacks and even encounter the Iraqi security forces," Sanjabi added.

On Tuesday, three MKO defectors gave an account of their ordeals during their stay at Camp Ashraf in Iraq. The spokesperson of the Iraqi Defense Ministry, General Mohammed al-Askari, said in a Tuesday press conference in Baghdad that the three former MKO members had escaped from Camp Ashraf and surrendered to the Iraqi security forces, a Press TV correspondent reported.

The official said that the defectors have provided the Iraqi government with the evidence required to shut down the camp according to international law. The former members of the terrorist group say the residents of Camp Ashraf are totally cut off from the outside world and are often tortured and traumatized for any show of dissent. Consequently, they are afraid to escape.

Abdullatif Shadvari, a former MKO member, who escaped from the camp two months ago, earlier said, “The punishment of those who try to escape from Camp Ashraf… is execution.”

On April 8, at least 34 people were reportedly killed in clashes between Iraqi security forces and MKO members residing in Camp Ashraf. Iraqi forces say there is evidence that the people have been killed by the organization itself.

On April 11, Iraqi government spokesman Ali al-Dabbagh said the cabinet is determined to shut down the camp. The group fled to Iraq in 1986, where it enjoyed the support of former Iraqi dictator Saddam Hussein, and set up Camp Ashraf in Diyala Province near the Iranian border.

More than 3,000 MKO members are residing at the camp. In addition, the MKO sends elements to Iran on spy and terrorist missions. The organization is also known to have cooperated with Saddam in suppressing the 1991 uprisings in southern Iraq and the massacre of Iraqi Kurds.

The MKO is listed as a terrorist organization by much of the international community, and is responsible for numerous terrorist acts against both Iranians and Iraqis. Iran has repeatedly called on the Iraqi government to expel the group, but the US has been blocking the group's expulsion by pressuring Baghdad against such a move.