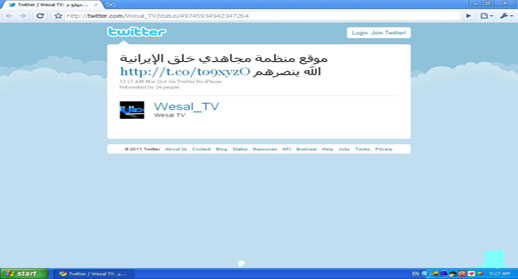 Reported by Habilian Association (families of Iranian terror victims) database, the excommunicative channel of Vesal, which is an extremist Wahhabi channel, has recently posted an article on its twitter web page in support for the Mujahedin-e Khalq terrorist cult, in which it has brought the terror group’s web address. Surprisingly the extremist Wahhabis kept their fingers crossed for MKO and asked God victory for the assassins of more than 12,000 innocent people in Iran and even a very larger number, over 25,000 people, in Iraq.

Based on the report, this channel is one of two notorious TV channels affiliated to extremist Wahhabis established two years ago and, in addition to provocative actions for Shiite killings and widening the gap and expanding discrepancy between Shiites and Sunnis from the beginning, it has always been seeking to promote violence through insulting and blaming the Shiite beliefs and has therefore been repeatedly faced condemning by many religious and political as well as media figures around the world.

The report also adds: The so called TV channel has recently cut its daily programs to announce support for the ruling family of Kingdom of Bahrain in suppression and destruction of Bahraini Shiite protesters, whom they called 'a bunch of terrorists'.

It ‘s worth mentioning that this extremist Wahhabi  channel’s last year seductions was about to lead to a civil war between Sunnis and Shiites and cause bloody clashes between Arabic countries; but this problem was resolved with the restraint of religious scholars.