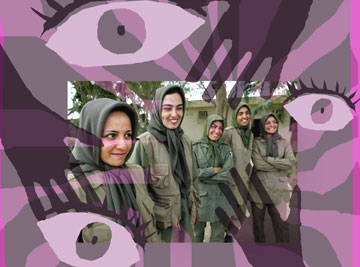 The shocking and terrifying facts unveiled by Ms. Batoul Soltani are about the ‘Salvation Dance’ which was performed by the Leadership Council’s women in front of Massoud Rajavi, the leader and founder of the Rajavi cult?

In this so-called Salvation Dance (nude dancing), the women of the Leadership Council were indoctrinated through cultic-religious psychological manipulation to remove all their clothes in front of their guru, spiritual leader, Massoud Rajavi, who is responsible for sending them to heaven while they die for him, in order to show their devotion and allegiance to him.

In her recent interview with Iran-Ghalam Association, Ms. Soltani has been courageous enough to reveal some shocking facts on sexual abuse against women in leadership Council of MKO by Massoud Rajavi.

Here are some extracted paragraphs of the above mentioned interview:

[…]Iran-Ghalam: in the conference held in Paris you pointed out the existence of sexual abuse and corruption in MKO cult […] I’d like you to enlighten our visitors on sexual exploitation committed by the cult's leader systematically.

Batoul Soltani: it's awfully difficult for me to review those memoirs in my mind but I'm thankful to God who put me in a position now to denounce the hidden facts of Rajavi's organization and I'm ready to swear to Quran in order to give testimony in any court of justice.[…]

Once we had become members of Leadership Council in the winter of 1997 the Rajavis held a meeting in Badi' Zadegan Camp [in Iraq]. We were told to take a bath before the meeting and all our clothes had to be clean […]Maryam Rajavi told us that this meeting was "the pool of Leadership Council, and "Dance of Salvation" with Massoud.[…] I was really worried about what was going to happen in the meeting. […] after everyone took a shower and wore make up, we were told to enter hall X which was decorated beautifully in white. There were two sofas …. [...]

Maryam told us:" since then you are Massoud's wives"[…]

Then Massoud read the wedding sermon for all women one by one.[…] then they took the table and spread a large white meters on the floor. I was shocked to see some high-ranking women of leadership Council took off their clothes and went to Massoud. Massoud was saying "yes take off your clothes of heresy and ignorance and dive in the pool to unite yourself with me in order to be resistant enough in every moment of your struggle." […] Maryam also said, "Get close to Massoud and unite with him."

I noticed that Maryam and some other high ranking members were monitoring us and trying to convince those of us who hesitated to remove their underwear.[…]Maryam said that we were no more jealous to each other so we could fight together.[…]she tried to persuade us to look at the others having sex with Massoud Rajavi.[…]