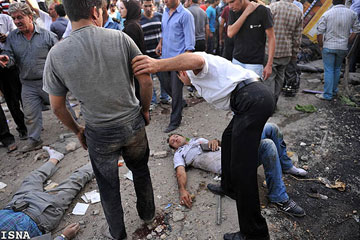 Iranian officials say US politicians and the CIA have openly supported terrorists groups such as Jundallah and the MKO.

Press TV: We will look more into this with Professor, Paul Sheldon Foote of California State University. Professor, it's good to have you with us. The timing of this attack is quite sensitive if you agree, as it comes during the Ashura ceremonies. What would you say is the intended goal of such attacks in Iran?

Foote: For many years now the neo-conservatives or neo-troskyites have been speaking in America with Iranian groups, suggesting the break-up of Iran. The whole purpose behind this is to go to minority groups and tell them that they are not well treated and to split up the country into little pieces.

Press TV: The US says those responsible must be held accountable. Jundallah says it has been supported by the US. How complicated is that?

Foote: It's not very complicated at all, while in general American leaders try to keep it secret, in February 2011, then Vice President Dick Chaney went to Pakistan and very openly spoke in favor of them.

He called them gorillas and not terrorists and was supportive of them. He met with Pakistani leaders about ways to help them. That is fairly clear. The rest of it has been done covertly by the Department of Defense and by the CIA.

As the earlier report mentioned by Bob Bear, and another former CIA agent Phillip Gerald had made similar reports about how the CIA is working with terrorist groups in the region.

Press TV: Professor, you just said such attacks are intended in breaking the country into pieces, but history has shown --at least for a number of attacks that have happened - that the lesson or the result was that people got more unified. Isn't that a message would you say the West hasn't received so far?

Foote: That's right. Unfortunately, large numbers of Iranian Americans, who parrot whatever the Zionists want them to say in this country, the truth needs to be told.

When we are talking about terrorist organizations and America supports many in the region, you have to ask yourself who's feeding them and who's providing them with weapons and so forth. These are thousands of people.

In the case of Jundallah, much of their financing is either coming indirectly from America, Saudi Arabia and Pakistani intelligence and certainly by the drug trade.

If Americans were really serious about ending the war on terror, tens of millions of Americans can stop using drugs tomorrow, and watch what will happen to the drug business and the terrorism in the world.

Likewise in Iraq, Jundallah has been working in the past with the Iranian communists. So here you have one group that claims to be religious and another claiming to be communist.

There are approximately 3 thousand MKO terrorists in Iraq being protected by the American military.

In 2003, American forces attacked a camp in Iraq and killed some of those terrorists, and ever since then we have been protecting them and using them inside Iran to do terrorists activities. How bad of a terrorist country can you be other than what America's example has become?

Foote: It's a great shame that the CIA has taken advantage of its secret budgets to do these kind of evil activities.

The American taxpayers over history have given a lot of secret latitude to the CIA on the grounds that it couldn't reveal who the agents were and the people were; therefore, they have been granted huge sums of money by Congress over the years with very little explanation of how they are spending it. Unfortunately, there are some very evil people now in the CIA who are supporting terrorist enemies of America.

Press TV: Many thanks to Professor, Paul Sheldon Foote with California State University joining us live from Irvine.