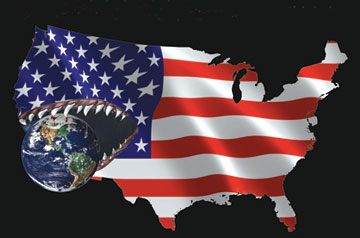 To justify the criminal economic sanctions against the Iranian people, the U.S. has for years insisted that Iran is supporting terrorism, threatening U.S. national interests, and pursuing a program of nuclear weapons manufacturing. As these harebrained allegations are increasingly losing credibility, the United States is now invoking a new ploy to justify its decision to further tighten the sanctions on Iran: “military dictatorship” and “human rights abuses,” as Secretary of State Hillary Clinton has occasionally grumbled about in recent months.

There are a number of obvious problems with this latest U.S. excuse for escalating sanctions against Iran. To begin with, it is a blatant interference in the internal affairs of Iran.

Fourth, in light of the fact that the U.S. is altogether silent in the face of heinous human rights violations under the rule of the regimes it calls “allies,” its alleged concern for “human rights abuses” in Iran is hypocritical and utilitarian: it uses the lofty ideal of defending human rights to disguise its nefarious intentions to impose economic sanctions or to embark on military aggression against that country. Hypocritical defense of human rights is often used to justify wars of aggression as humanitarian operations, or “just wars,” as they were called in times past. Just as this ruse was used in 1999 to wreak carnage on Yugoslavia, so it is now used to pave grounds for committing similarly heinous crimes against Iran.

Regrettably, many left/liberal/antiwar individuals and organizations often fall for this hoax, thereby endorsing (or remaining silent in the face of) U.S. wars of aggression on ethical grounds, that is, on grounds of fighting dictatorship or terrorism in the hope of achieving liberation and democracy. Of course, to make the ruse credible, champions of war and militarism usually start with demonization and distortion, and then proceed to aggression and invasion.

It must also be pointed out that the purported U.S. support for human rights tends to be narrowly focused on purely cultural issues such as life style and identity politics, that is, the politics of race, gender and sexual orientation. As such, it is largely devoid of basic economic needs for survival. Even a cursory comparison with the Universal Declaration of Human Rights and Freedoms (UDHRF), adopted on 10 December 1948 by the General Assembly of the United Nations, reveals some fundamental shortcomings of the U.S. human rights protocol. Human rights according to UDHRF include basic economic or survival needs such as:

“the right to work … to protection against unemployment … to just and favorable remuneration ensuring for himself and his family an existence worthy of human dignity, and supplemented, if necessary, by other means of social protection. . . . Everyone has the right to a standard of living adequate for the health and well-being of himself and of his family, including food, clothing, and housing and medical care and necessary social services, and the right to security in the event of unemployment, sickness, disability, widowhood, old age or other lack of livelihood in circumstances beyond his control. . . . Motherhood and childhood are entitled to special care and assistance. All children, whether born in or out of wedlock, shall enjoy the same social protection. . . . Everyone has the right to education.”

Human rights a la USA does not include any of these basic human needs—all the nauseating propaganda of championing human rights notwithstanding. Indeed, many of the basic economic rights, which came to be known as the New Deal reforms, and which were achieved through long and heroic struggles of the working people and other grassroots, are now systematically undermined in order to pay for the gambling losses of the Wall Street financial giants.

Finally, and perhaps most importantly, to the extent that there has been an undeniable rise in the power of armed forces in Iran, as well as a corresponding curtailment of civil liberties there, such unfortunate developments have evolved as a direct consequence of the constant threats posed by the U.S. imperialism and its allies to that country. Iran’s strengthening of its armed forces has become a virtual necessity in self-defense against threats of war, destabilization, sabotage, sanctions, and other kinds of covert and overt operations engineered by the imperialist-Zionist forces.

By dividing the world into “allies” and “enemies,” the powerful war profiteering interests in the Unites States, the military-industrial-security colossus, compel both “allies” and “enemies” to militarize. While “enemies” such as Iran, Venezuela, and North Korea are forced to strengthen their defense capabilities against imperialistic aggressions, “allies” such as the regimes ruling Egypt, Saudi Arabia and Colombia are driven to militarization against their own people, since regimes loved by U.S. imperialism are hated by the overwhelming majority of their own citizens.

Critics tend to bemoan the rise in the power of the Islamic Revolutionary Guards Corps (IRGC) in Iran without bothering to explain how the IRGC came to existence, or why it has expanded to where it is today. Who is to be blamed for the ascendance of its influence in the Iranian politics and economics?

Those even faintly familiar with the history of the IRGC would recall that it came into existence as a resistance force against counter-revolutionary forces in Iran, which have always been supported by U.S. imperialism and its allies. Although it was formed in the spring of 1979 as a small paramilitary revolutionary force in the fight against the Shah’s rule, it remained for the U.S.-instigated invasion of Iran by Saddam Hussein to expand it to a fully-fledged military power in defense of Iran’s territorial integrity. The ensuing brutal 8-year Iran-Iraq war (1980-88), in which the U.S. and its allies wholeheartedly supported Saddam Hussein, and the Guards’ legendry sacrifices and heroic defense of Iran independence drastically enhanced their size, their prestige and their power.

Although Iraq’s war with Iran ended in 1988, other forms of U.S. wars against Iran have continued to this day. These have included destabilizing “soft-power” operations in the name of democracy, covert operations through all kinds of NGOs and fifth-column groupings, promotion of and support for terrorist operations such as those carried out by Jundullah and Mojadeen Khalgh (MKO, or MEK), constant military threats, psychological warfare, and economic sanctions. Not surprisingly, the role and the influence of IRGC and other security forces in Iran have increased accordingly. Also unsurprisingly, as the political power of Iran’s armed forces has thus increased, so has their economic power.

I say “unsurprisingly” because it is altogether in the nature of things that large standing armies gradually extend their military-security power to the realm of economics. The fully-fledged and the best example of this phenomenon is the rise of the monstrous military-industrial complex in the United States—which, contrary to the defensive nature of Iran’s military force, represents an offensive imperialistic force.

It is of course a truism that maintaining large standing armies will sooner or later lead to authoritarianism. It is equally obvious that by the same token that militarization of the world can be blamed largely on imperialistic U. S. foreign policies, so can the rise of many authoritarian regimes around the world can be attributed to those oppressive policies.

When a country (whose only sin is its aspiration to national self-determination) is labeled by U.S. imperialism as “our enemy” and is, therefore, encircled and threatened by the U.S. military monster, that country’s political, economic and democratic growth is bound to be distorted or derailed from a path of a healthy, natural or spontaneous evolution. Finding themselves in the bull’s eye of the menacing U.S. war juggernaut, security forces of such beleaguered countries are bound to react nervously/harshly in the face of protest demonstrations of domestic opposition, even when such demonstrations are for legitimate reasons. The shameful history of covert U.S. operations abroad, including the violent overthrow of many democratically elected leaders through military coup d’états, shows that expressions of indigenous opposition or grievances in such “enemy” countries are often subverted by well-financed and well-armed U.S. agents, either penetrated from outside or recruited from within, thereby warping the development of a “healthy” political/democratic process in those countries.

What is utterly demagogical is that, having thus perverted the politico-democratic process in such countries, U.S. propaganda machine then turns around and blame the religion or culture or leaders of those countries as inherently incompatible with democratic values. Regrettably, not only do most of the American people but also many people elsewhere, including in the countries targeted for destabilization, fall for this ruse—in effect, blaming the victim for the crimes of the perpetrator.

Viewed in this light, the rise in the influence of the military-security forces in the Iranian politics and economics is a direct result of the menacing imperial policies of the United States and its allies toward that country.

Thus, President Obama’s or Secretary Clinton’s or other U.S. policy makers’ bellyaching about the rise of the power of the armed forces in Iran represents a case of gross obfuscation, that is, a case of barking up the wrong tree: instead of blaming IRGC they should blame their own imperialistic foreign policies, which nurtures militarization and curtailment of civil liberties not only in Iran but also in many other parts of the world. Indeed, militarization of the world and the resulting proliferation of many (relatively smaller) military-industrial complexes around the globe are unmistakable byproducts of the monstrous U.S. military-industrial complex. The inherent dynamics of this monster as an existentially-driven war juggernaut compels other countries around the world (both “allies” and “enemies”) to embark on paths to militarism and authoritarianism.