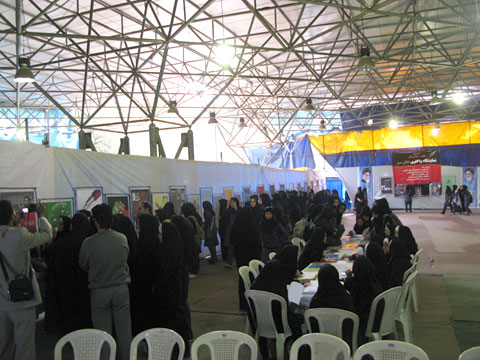 Habilian Association (families of terror victims in Iran) has set up a large exhibition titled “Insight” (Basirat) at the place once used to be American Embassy in Iran (now known as The American Spy Nest) in cooperation with university students and ministry of education.

The Insight exhibition is comprised of different subjects including standing against American imperialism, introducing the old hypocrisy (considering MKO terrorist activities) and new hypocrisy (the green hypocrisy) and analyzing the role America and other western superpowers played during the last year after-elections riots in Iran.

Meanwhile and in the sideline to the exhibition different relevant workgroups and seminars would be held while distinguished politicians and exports would be invited for giving lectures and attending the workgroups.

Also and in coordination with the ministry of education, there would be a devoted time for the high school students from around the capital city of Tehran to pay a visit to the exhibition and enjoy the documents about the crimes mujahedin-e Khalq terrorist cult has so far committed against Iranian nation and also the green hypocrisy and the American imperialistic role in creating unrest inside Iran and sponsoring terrorism against the country.