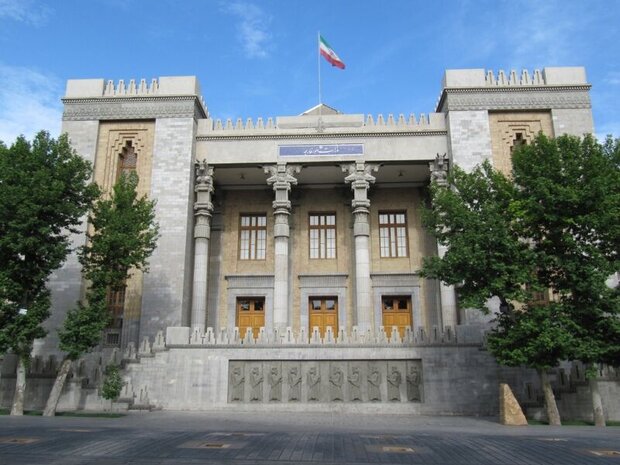 In reaction to the recent terrorist attacks in the country, the Iranian Foreign Ministry in a statement called on the international community and forums to condemn terrorist incidents in Iran to prevent further violence.

"In recent days, the noble nation of Iran and the international community witnessed the criminal actions of a group of merciless terrorists against innocent citizens and defenders of the security of Iran in the cities of Izeh, Isfahan and Mashhad. Unfortunately, a number of our dear compatriots, among them innocent women and children, were martyred or injured in these terrorist attacks," the statement read.

The Ministry of Foreign Affairs of the Islamic Republic of Iran also strongly condemned these sinister terrorist attacks and expressed its condolences to the people of Iran, especially the bereaved families of the martyrs, and prays to the Almighty God for the speedy recovery of the injured.

"Undoubtedly, the deliberate silence of the foreign promoters of chaos and violence in Iran in the face of the most obvious terrorist operations in several Iranian cities has no consequence other than encouraging the terrorists and strengthening terrorism in the world," the statement added.

The Foreign Ministry's statement went on to say, "The terrorist operation in the cities of Izeh, Isfahan, and Mashhad, which happened after the recent similar attack on the pilgrims and worshipers of the Shah Cheragh holy shrine in Shiraz, is still a confirmation of how the enemies and opponents of the Islamic Republic and great nation of Iran hide their criminal nature behind the false mask of compassion for the people and children of this country."

Terrorism is condemned in any form, time and place, and therefore it is the duty of the world community and the international forums to condemn the recent terrorist acts in Iran, and not allow a safe haven to be created for the violent and extremist movements, it added.

"In this regard, the Islamic Republic of Iran, based on the standards of international law and in accordance with its laws and regulations, reserves its right to pursue legal and judicial acts of terrorism committed by terrorists and their supporting governments."

At least seven people were killed after terrorists opened fire at people and security forces at a crowded market in Izeh in the southwestern province of Khuzestan on Wednesday.

Three people were also killed and eight security forces injured during riots in Semirom in the central Iranian province of Isfahan.

Two security forces were also killed and two others wounded in the city of Malekshahr in Isfahan Province.