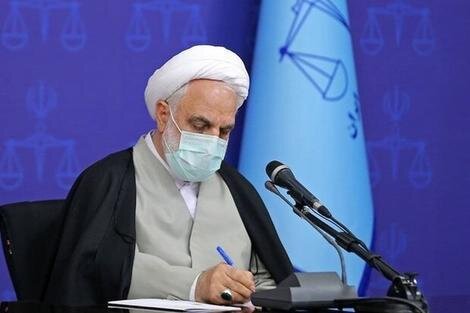 In a letter to Faeq Zeidan, the head of the Supreme Judicial Council of Iraq on Tuesday, Ejei expressed his satisfaction with holding three rounds of negotiations in the form of a joint investigation committee between the judicial officials of Iran and Iraq.

“This shows the results of this joint cooperation. The two countries have the will to fight terrorism, establish justice, maintain peace and security, and expand friendly relations, especially bilateral judicial cooperation,” the Judiciary chief wrote in his letter.

Ejei stressed that the assassination of General Soleimani, Abu Mahdi al-Muhandis and eight of their companions by the American officials and their representatives in Iraq is against international peace and security

The judiciary chief stated although this terrorist act was carried out on the order of president Donald Trump with the cooperation of some other American officials and collusion by some other countries, their position does not prevent them from being held accountable and punished.

And the measures initiated in the Iraqi judicial system also shows the determination of Iraq to arrest, try and punish these criminals, he added.

The head of the judiciary further reminded that the requirement for justice is to comply with the principle of speed in proceedings.

“Considering that the mentioned terrorist act took place in Iraq and more than two years have passed since its occurrence, issuing an order to speed up the investigation, trial and punishment of the perpetrators of this crime is the demand of the people of Iran. In this regard, the judiciary of the Islamic Republic of Iran is still ready to continue cooperation with the judicial system of the Republic of Iraq,” he wrote.

Concluding his letter, Ejei prayed for success and pride from the almighty God for the friendly and brotherly government and nation of Iraq.