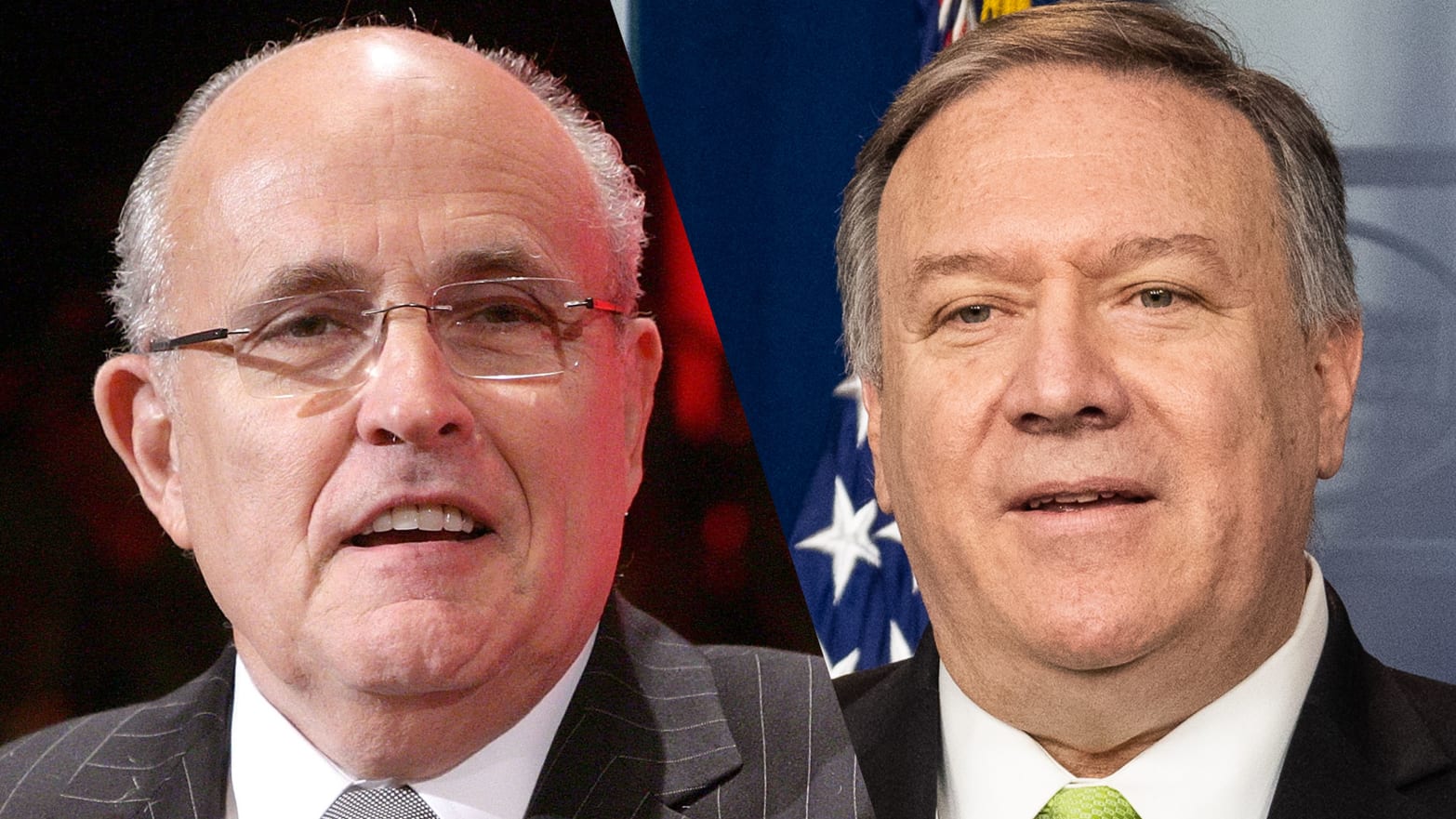 The State Department ordered employees days ago not to meet with an Iranian dissident outfit close to Rudy Giuliani and other Trumpworld figures. Now, the memo is being overridden.

At whiplash speed, the State Department is walking back an order barring American diplomats from meeting with controversial Iranian dissident groups—including one close with Trump World allies and previously designated as a terror group, the Mujahedeen-e-Khalq (MEK). The initial memo, greenlit by a career State Department employee, angered Congressional Iran hawks. And the Department’s move to change its guidance has drawn cheers from them.

The first memo, first reported by Bloomberg and reviewed by The Daily Beast, included sober warnings against meeting with the MEK, pointing to its terrorist past and saying most everyday Iranians have a low view of the group. The memo also warned about interactions with the Democratic Party of Iranian Kurdistan, highlighting its attacks on Iranian military targets; and directed diplomats to get permission from State Department headquarters before meeting with members of an Azeri separatist group. Secretary of State Mike Pompeo sent out the memo on January 7, and it cautioned that meetings with these groups could undermine U.S. efforts to reach a deal with Tehran. Joey Hood, a senior career State Department official, approved the memo, according to the document The Daily Beast reviewed.

But now, the memo is being overridden. The Daily Beast obtained a cable, sent to U.S. diplomats Sunday night, superseding the week-old directive.

“Posts should welcome opportunities to meet with and learn from members of the Iranian diaspora community,” said the cable, which explicitly noted it “supersedes” the January 7 missive. “After 40 years of repression and violence at the hands of the Ayatollahs, the Iranian people’s pride in their history has not diminished nor has their resolve to celebrate it in the face of the Islamic republic’s abuses.”

The cable went on to say that U.S. diplomats should consider hosting members of the diaspora for “Persian cultural events,” while noting that “not all Iranian opposition groups’ interests and objectives align with U.S. policy priorities.”

“While it is up to the Iranian people to determine the future course of their nation, the United States will continue to stand with them and echo their calls for justice and accountability,” the cable said.

While the new memo did not mention MEK or the other groups, it said diplomats should simply “use good judgement when receiving invitations or meeting with opposition groups” and should raise questions and concerns with senior State officials––an apparent revocation of the order that they only take such meetings with Foggy Bottom’s explicit approval. State Department spokespersons did not respond to multiple requests for comment on the cable.

Trump lawyer Rudy Giuliani—who the MEK hired to help it get off the U.S. list of foreign terrorist groups and who recently called the group “my MEK people”—welcomed the reversal. “[The MEK] is very supportive of a free…Iraq. It’s run by a great woman who is committed to ending suppression of women and in a non-nuclear Iran,” the president’s personal lawyer messaged The Daily Beast. “They were of great assistance to us during [the] Iraq invasion and are supported by a very non-partisan group of American former and present public officials.”

The group has a controversial past. For, among other things, its alleged role in assassinating three U.S. Army officers and three more civilian contractors, the MEK found itself on the American government’s official list of foreign terrorist organizations. It’s also been accused of acting as a death squad for the late Iraqi dictator Saddam Hussein. A 2009 Rand Corporation paper described the MEK’s “near-religious devotion to [its leaders], public self-deprecation sessions, mandatory divorce, celibacy, enforced separation from family and friends, and gender segregation.” The group and its allies vehemently deny all these charges.

The fast-paced walk-back came after the initial State Department memo drew ire from Congressional Iran hawks. One noted that the memo went out to diplomats just days after a U.S. strike killed Soleimani, and as senior political officials at th

e State Department were presumably bracing for Tehran’s retaliation.“It’s a pretty significant 180 for State,” said Christian Whiton, formerly a senior advisor to the Department under Presidents Trump and George W. Bush. “Even if it’s worded diplomatically, it’s not that common to have something issued and then rescinded almost immediately. And I think it just goes to show that the original statement was something done at a junior level that didn’t have support or buy-in from senior political officials.”

It was the second time in recent months that Hood, the career official who greenlit the memo, angered Hill hawks. In Congressional testimony on December 4, he had a tense exchange with Sen. Ted Cruz about funding for the Lebanese government and whether that money went to Hezbollah. A transcript of the hearing indicates that Hood laughed in response to a question from Cruz; the episode left raw nerves.

“They’re undermining the president’s policy when nobody’s watching,” said a Hill staffer for member pushing for a tougher policy toward Iran.

Others, meanwhile, pointed to the reversal as the latest struggle by the Trump administration to clearly explain its stance on conflict with Iran. A Congressional staffer working on Iran policy and who favored the reversal noted that it comes as the administration has sent mixed messages on the legal basis for the Soleimani strike and the number of U.S. embassies threatened by Iranian-allied Shiite militias.

The State Department reversal, as reflected in the cable, comes as Pompeo and other U.S. officials, including Defense Secretary Mark Esper, have struggled to publicly articulate the U.S.’ next steps after killing Soleimani and to reconcile their accounts of the intelligence that precipitated that strike.

For years, the Trump administration had maintained a campaign of “maximum pressure,” leveling crippling sanctions on Iran’s economy in an effort to re-open talks with Tehran on a nuclear deal. Since the Soleimani strike, Trump administration officials have struggled to define the administration’s Iran policy. Some have said the maximum pressure campaign always included a military option. Others say the U.S. has long communicated to the Iranians that if Tehran killed Americans, there would be military consequences.

Now, it seems, the State Department is shifting its thinking on how to approach Iran on a diplomatic level following the Soleimani strike. In the hours immediately following the assasination, U.S. officials, in an attempt to de-escalate, described the hit as a warning and insisted that America was still interested in working with Iran on conversations about the nuclear deal. The U.S. special representative for Iran Brian Hook appeared on BBC World, saying that killing Soleimani was designed to “advance the cause of peace.” Sunday’s cable, meanwhile, will cheer Iran hawks––and frustrate Obama administration alums.

“There are at least two problems with this reversal,” said Jarrett Blanc, a former Obama administration official who worked on Iran policy. “The first is that the policy is wrong. U.S. diplomats should not be meeting with MEK or its affiliates. They represent a dangerous cult. We should avoid all the mistakes of the Iraq war including being hoodwinked by purported diaspora opposition with no links at home. The second problem is that it reflects the total incompetence and chaos of this administration’s policy making —to send out an instruction and less than a week later countermand it. They just don’t know what they are doing.”

For years in the United States, lobbyists and advocates for the MEK have operated an aggressive, sustained, and successful campaign to have the group removed from the State Department’s terror list, a move that was finalized in the Obama era. The organization’s stateside backers also include Democratic figures such as retired Gen. Wesley Clark and Howard Dean, as well as attorneys Victoria Toensing and Joseph diGenova, two informal legal advisers to Trump.