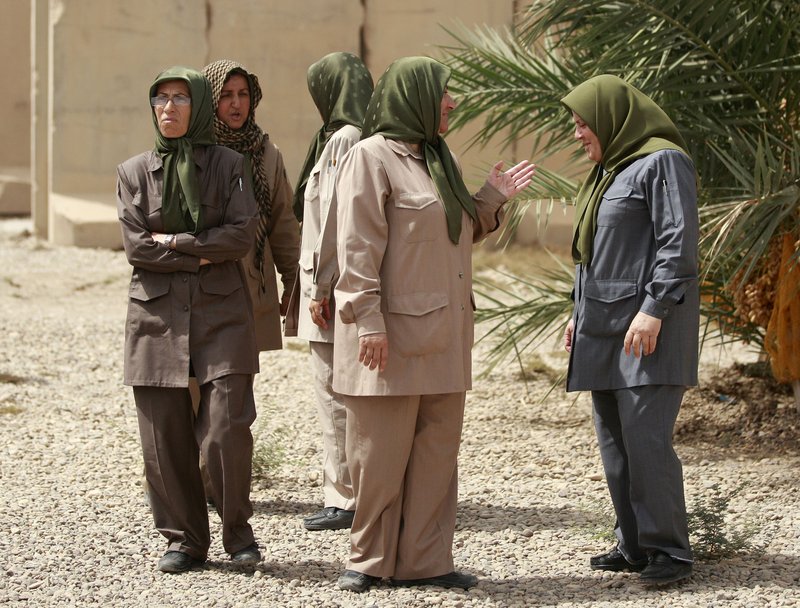 Back in 2016 I wrote a piece on this weblog entitled US Politicians Should Stop Embracing the Authoritarian Terrorist Group, MEK, in which I attempted to warn US politicians of being close to People’s Mujahedin of Iran, an extremist Islamist-Marxist group. Since then, two developments have moved to revisit this subject: (1) The US government has gotten much closer to this group and (2) I’ve read a book which has made me realize that they were far worse than what I imagined in my worst nightmares.

In my 2016 piece, I first briefly introduced the group:

What do Americans hate the most? It seems to be Islamic terror group and armed Marxists. The Islamists are the focus of the war on terror now and generally considered the greatest threat to US’s interests, and communists were the big enemy during the Cold War. Also, Saddam Hussein seems to be a great enemy of the US, considering how they went to two wars against him. Then why, one really needs to ask, US politicians who frequently warn against the dangers of Islamic and leftist extremism, endorse an authoritarian terrorist group that are Islamist and leftist militants at the same time, and fought loyally for Saddam Hussein? […] I’m talking about MEK of course. Their name means People’s Mujahedin of Iran. This group has an ideology which mixes radical Islamism and radical leftism. […] This group is worse than the Islamic Republic. It’s worse than radical extremist and conservative elements of the regime, let alone reformists and moderates. They’re much more authoritarian, theocratic, and repressive than any regime in our entire history.

I think they are as bad North Korea’s regime or Pol Pot’s, as bad as Taliban and IS. The reason that my assessment of them has soured this much is a book called Masoud’s Organization, written by Mohsen Zaal, a liberal belonging to the moderate Muslim movement, revealing the repugnant nature of this group. This book is only available in Persian, and it’s entirely based on memos and observations by the former members who have fled it.

In my previous blogpost about the books, I mentioned the things that are bad about this group:

They torture and kidnap their own members to force them to remain and not leave the group. They work in absolute secrecy and have zero transparency. They engage in a Stalinist-level cult of personality for their leaders. They have engaged in many political assassinations and terrorist bombings, one of which killed a group of American citizens. Their media is complete lies, propaganda which rivals the Nazi’s. Not only it’s cult of the personality, it spreads completely fabricated lies. […] When Iran-Iraq War was happening, they defected Iran, joined forces with Saddam Hussein, and even helped him oppress the Kurdish people.

All of this is true, but what I missed was the terrifying proportion of how actually evil this group was. Let us take a look at things mentioned by Zaal in his book about the atrocities committed by them:All individuality is killed among members.

All value is given to following the leader, and not anything else. You should be completely and thoroughly committed to the leader. Your value is not determined based on your rank in the previous iterations of the group or your history of revolutionary struggles, but merely based on how loyal and close to the leaders you are.

No criticism or disagreement with the leadership is allowed, only absolute obedience. If you criticize the leadership, other members will curse at you or beat you up. As you have no individuality outside the leadership, no personal attribute is tolerated. One member, for examples, disfigures his face with a utility knife because his handsomeness is considered an obstacle to true devotion to the leader. Children receive no education except being indoctrinated to the cult’s ideology. Members were completely cut off from the outside world with no phones, internet, or TV, and even reading books is frowned upon.

The members have absolutely no privacy. They’re constantly monitored, even in showers and toilets, and their lockers have no locks. If you don’t have a picture of the leader in your locker, the cult will be suspicious of you. Everything one writes is monitored. Upon joining the cult, all your personal documents (e.g. passport) are confiscated. Members avoid talking to each other, because every word can be used against you later.

Martyrdom is encouraged, and all martyrs are valued because they gave up their lives for the leaders (not the cause). All members are encouraged to commit suicide, whether if they are arrested by the police (Iranian, Iraqi, or European police), or as a part of protests (self-immolation to protest the arrest of Maryam Rajavi). All of these show that they don’t consider human life valuable in the slightest.

All sexuality is oppressed. Uniforms are mandatory, and women’s uniforms include hijab. All cosmetics and accessories are banned. Actions such as combing your hair, removing facial hair for women, wearing loose shoes, rolling your sleeves for women, and having a hand in the pockets of one’s pants are considered “indecent” and “immodest” and punished. Even when it comes to uniforms, wearing new uniforms instead of old tattered ones is considered “bourgeois” and is frowned upon.

Men and women are not allowed to shake hands. They are also not allowed to have eye contact when speaking to each other. Men are not allowed to ever sit next to a woman, especially in a car. MEK’s paranoia regarding sexuality goes to ridiculous extremes: If a woman is sitting on a chair, no man is allowed to sit on the same chair after her unless some time passes and her body’s warmth leaves the chair.

Of course, these limits are not enforced upon Masoud Rajavi, the leader. All MEK women are “his wives”, and he has sex with many of them. These acts are called “salvation dance” and they are defined not as sexual but spiritual and religious acts.

One way to enforce this culture is “confession”, sessions where people gather and lament their own lack of commitment to the leadership and the idea of revolution. In these sessions people humiliate themselves and others, crying and stating that they deserve to be executed. If you don’t come up with an adequate thing to confess, you will be verbally and at times physically attacked by others, who think you are hiding your sins.

Being a religious cult, prayers and fasting are mandatory, and men are required to have mustaches. More importantly, gradually the leaders are elevated to the level of holy figures in the Shia religion. It seems that in recent years he has gone a step further and has called himself the 12th imam, the Islamic messiah, and that is why he has disappeared from the public since 2003 (if the real is not that he’s dead, at least).

Not even the slightest of infractions are tolerated. Even an anti-Rajavi graffiti on the toilet wall is investigated by comparing it to the handwriting of people and imprisonment and torture.

This culture results in an event where all married couples are forced to divorce, because the love of a spouse lessens from the love of their leader and they should have only one love, the leader, no other. The next logical step is also taken: all children are taken away from their parents because parental love dilutes the love pf the leader. When a woman cries as her infant child is being taken away, she is punished for her lack of obedience and exhibiting sadness at the order of the leader.

Likewise, having friends is frowned upon and people are discouraged from befriending each other. People are used to spy on one another and this leads to an atmosphere where everyone is suspicious of every body else. Even having pictures of loved ones is considered bad, and members are encouraged to trade in the pictures of their family for pictures of the Rajavis.

Disobedient members are punished in the most gruesome ways. Imprisonment and torture is rampant, members are tortured by being beaten down or whipped. Some people are kicked on the head with boots. Sleep deprivation, mock executions, and rape threats are also another torture method. One woman was forced, under torture, to confess in public that she was raped by the Iranian police, and then to confess that she wants to have sex with men. When Masoud Rajavi was consolidating his leadership position, he tortured one of the other leaders by cutting off one of his fingers, and then killed him.

If you are accused of a crime, denying it is fruitless because you are just assumed to be guilty, and you will be tortured and put under solitary confinement under metal shelter buildings. You will not be freed unless you confess. Some people were kept there for eight years. There are information of about three people who were killed under torture. Some prisoners were handed to Saddam’s regime. Sometimes people were taken to the border with Iran and were told they can return to Iran, but once they began leaving they were shot in the back and killed.

I hope that you can now understand why the idea of MEK being propped up by the US regime to destabilize Iran is so scary to me as an Iranian, and I hope you can see why I’d never even consider supporting them, because they are worse than even the worst elements of the Islamic Republic, let alone its moderates and reformists.

MEK has always been supported by the US, but it has never been so close to an administration as it is now close to the Trump’s regime. Among people who were very close to the MEK, one, John Bolton, is now Trump’s National Security Advisor, one, Mike Pompeo, is Secretary of State, and one, Rudy Giuliani, is the president’s personal lawyer. These officials have not been shy about flaunting their alliance with the MEK, as Pompeo addressed them, and Giuliani spat on a copy of the Iran Deal in their conference.

Trita Parsi summarizes the closeness of the MEK and US administrations:

Given the MEK’s long record of terrorism, human rights abuses, and murder of US citizens, one would think that senior American officials like Giuliani, Pompeo, and Bolton wouldn’t go near the MEK, let alone fraternize with its members or take its fees. But when it comes to Iran, the usual rules don’t apply.

Even when the MEK was on the terrorist list, the group operated freely in Washington. Its office was in the National Press Club building, its Norooz receptions on Capitol Hill were well attended by lawmakers and Hill staff alike, and plenty of congressmen and women from both parties spoke up regularly in the MEK’s favor. In the early 2000s, in a move that defied both logic and irony, Fox News even hired a senior MEK lobbyist as an on-air terrorism commentator.

Al-Qaeda may treat its members better, but rest assured, neither al-Qaeda nor ISIS has ever rented office space in Washington, held fundraisers with lawmakers, or offered US officials speaking fees to appear at their gatherings. […] At the heart of this improbable-seeming affinity lies a sense of common interest between these anti-Iran fundamentalist, pro-war elements in Washington and Rajavi’s terrorist militia. The US hawks have no problem with the MEK’s terrorist capacities because the group’s utility is beyond dispute—after all, NBC reported that Israel’s spy agency, the Mossad, relied on MEK operatives to assassinate Iranian nuclear scientists during Iran and Israel’s secret dirty war between 2010 and 2012.

It’s time for US liberals, progressives, and anyone who supports the idea of human rights to demand action against this terrorist group. The real reason that the Trump regime has been able to freely paternalize with MEK is the fact that there is radio silence in western media regarding them. It’s time to protest and demand the US to stop sponsoring this dangerous cult.