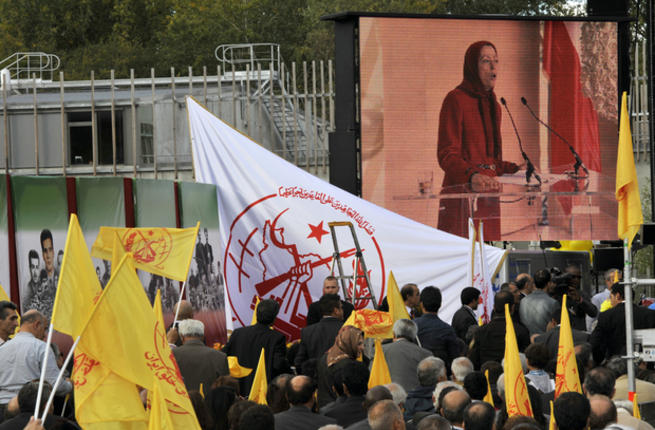 Someone is paying a lot of money to make the controversial Mojahedin Khalq group, (better known by their initials MEK), look like a democratic opposition to Iran’s Islamic Republic. And whoever they are, they have not set themselves an easy exercise. Rebranding a once U.S. proscribed terrorist group, with a reputation for acting like a cult will be quite the uphill struggle.

The MEK was once a leftist group opposed to the rule of the Shah in Iran. Their ideology was a blend of Marxism and Islamism, and they ran a bombing campaign in Tehran in the 1970s. They joined the chants of “Death to America”, and are thought to have been responsible for the deaths of six Americans in this period. They initially supported the Islamic Revolution, although they soon fell afoul of the newly established Supreme Leader. They were later responsible for the deaths of 101 officials and members of parliament in 1981 after attacking the party headquarters of the Islamic Republic.

They fled Iran for France, and then for Iraq, where they were sheltered by Saddam Hussein. Saddam armed and funded the group, and the MEK began conducting raids in Iran towards the end of the Iran-Iraq war. This alliance with Saddam has earned them an unsavoury reputation in Iran, as hypocrites and even traitors.

But after the American invasion of Iraq in 2003, the MEK vocally distanced themselves from Saddam and insisted to the Americans that they were democratic freedom fighters. Even by the standards of rebel movements, this was a deeply cynical switch of alliances. The MEK clearly sensed the advantages of adopting the “democracy” label. But the behavior of its own leaders was quite the opposite of democratic.

The MEK leaders in Iraq, husband and wife Masoud and Maryam Rajavi, ran the group through obsessive control over its member’s behavior - enforcing total sexual abstinence, making use of torture, and encouraging lethal violence against any perceived enemy, including members’ families. According to a Human Rights Watch report, dissenters who criticized the Rajavis or expressed an intention to leave were subject to torture. Two of their members were tortured to death.

This extreme behaviour persisted after 3000 group members were resettled in Albania at the behest of the Americans, who apparently hoped the group would undergo a de-radicalization program. Masoud Rajavi seemed to disappear during the invasion of Iraq, and he is now thought to be dead. Maryam Rajavi took over sole control of the MEK leadership.

She retained tight control of their members’ lives in Albania as well, reportedly doling out minimal money to each of its members to allow them to buy rations of food. She continued to forbid them from speaking to their families or leaving. At the same time, she began effectively courting anti-Iran American politicians, selling herself as a democratic opposition-in-waiting to the Islamic Republic. Many Iran hawks seemed to buy it, despite the fact that the MEK had been proscribed as a terrorist group by the Clinton administration, a designation that was not lifted until 2012 after extensive lobbying by Rajavi.

Rajavi has now incorporated the MEK into an organization called the National Council of Resistance in Iran (NCRI), which bills itself as “the one and only democratic alternative to the Iranian regime”. Since then, she seems to have won the backing of some powerful, and rich international allies.

Whoever the MEK’s financier, they are not alone in wanting this rebranding to work. The Trump administration has no shortage of Iran hawks who are desperate to see the back of the current Iranian regime, and are happy to tout the MEK as a replacement. But it is critical to question what the MEK’s backers really see in the group.

Do they genuinely believe that the MEK is a legitimate democratic alternative? Or do they see the group as a cosmetic prop, one they know Iranians will inevitably reject, but that serves for now as a hypothetical opposition, in a consequences-be-damned game of regime change? Whichever it is, they are playing a very dangerous game.

Those looking for the MEK’s financial backers tend to point the finger at Iran’s old enemy Saudi Arabia. There is no conclusive evidence that Riyadh is the group’s piggy bank, but there are some suggestive signs. For a start, whoever is funding the group has an impressive budget.

The MEK’s annual conference in Paris has reliably featured high-profile American politicians. They are mostly Republicans on the far right of the party. John Bolton, currently President Trump’s National Security Advisor and previously American Ambassador to the United Nations under President Bush, has addressed the MEK annual conference in Paris for several years now, and has received speaking fees of up to $40,000 for an appearance.

Newt Gingrich and Rudy Giuliani have also taken the MEK’s stage for $25,000 each. And another guest at their 2016 conference was Saudi Prince Turki al-Faisal, himself a former Saudi ambassador to America and the UK. While there, he declared “I, too, want the downfall of the Iranian regime.”

There is no question that the current regime in Tehran has a poor claim to democracy, and an even worse record of respecting civil liberties and human rights. But it is misleading to speak of the Iranian state as a single entity. Iran’s government is split between the Supreme Leader Ayatollah Khamenei and his clerical judiciary, the Revolutionary Guard’s security apparatus, and the Presidency. The President of Iran is the only arm of the central state that is elected.

Elections in Iran are troublesome affairs, and allegations of fraud are not uncommon. Nor can the President act unimpeded. His plans will be actively undermined by the clerical and the security establishments when there are disagreements. However, the Iranian peoples’ selection of presidents for the past few years have been telling. Since 2013, religious hardliner candidates have lost every local and national election. They were defeated by more pragmatic candidates, who have pushed for greater engagement of the Islamic Republic with the outside world.

Current President Hassan Rouhani is one of these. He staked both of his election campaigns on selling Iranians the benefits of the 2015 nuclear deal with America. This does not mean Rouhani is a democratic liberal. He believes in the Islamic Republic, and even if he were able to reform to the extent he would like, he would still fall short of the hopes of many. However, he is still the closest thing Iran has to a democratically elected leader right now – not a product of total freedom of choice, but a peoples’ choice nonetheless. And despite the group rebranding itself as a beacon of democracy, the MEK is currently focused on attacking the elected Rouhani, and his pragmatist and reformist allies.

A reformist strategist and activist in Iran who wished to remain anonymous told Al Bawaba:

“If you look at tweets of the organised supporters of regime change in Iran, including MEK and parts of the Iranian opposition who support some sort of military intervention against the regime, you can clearly see that as of about six months ago, the main target of their tweets has been the reformists. Their analysts, speaking on channels like BBC Persian and VOA Persian, have repeatedly said that in order to overthrow the Iranian government, we need to first overthrow the reformists, because the reformists are the main barrier to overthrowing the government, because they are keeping the public hopeful about some sort of change in the future.”

The American government appears to have joined their fight; Reuters reports that they have begun a targeted messaging campaign against the Iranian regime, although did not specify which elements of the regime the effort was attacking. Nevertheless, such a campaign further undermines Washington’s claim that they are only seeking behavior change from Tehran, and not regime change.

Whether the Islamic Republic’s reformists can ever offer the meaningful change their supporters hope for is a legitimate line of questioning. And it is perfectly true that any other alternatives to the Islamic Republic are few. But it is troubling that the supposed “democratic alternative” has taken it upon itself to attack the only part of the Iranian establishment that is democratically elected.

And it is particularly worrying when that own organisation’s claim to being “democratic” is paper-thin, founded on nothing but its own claim to be so, and with a record of past behavior that suggests quite the opposite. Rajavi’s current claim to being “democratic” comes from her “Ten Point Plan”, and her claim that if the MEK were to assume power in the event of regime change, they would ensure parliamentary elections within six months. Her Ten Point Plan is not in itself objectionable. It outlines commitments to secularism, democracy, gender equality, human rights, a free-market economy, and a foreign policy based on “peaceful coexistence” – objectives that many Iranians likely share.

The problem is that Rajavi’s history shows her adopting whatever label is politically convenient at the time, usually without living up to it. The 10 Point manifesto itself is quite an about-turn for a group that began as Islamist Marxists. And if the description of Rajavi as an autocratic “cult leader” is even somewhat justified, then taking her word that she will give up power after six months would be foolish indeed. Cult leaders crave power, and will invariably find a reason to cling on to it.

The MEK’s reputation precedes them. And however much Iranians may dislike the Islamic Republic, they appear to have neither forgiven or forgotten the Rajavis' bombing campaign whilst they were still in Tehran, their siding with Saddam Hussein during the war, or their reputation for controlling and abusive behavior. An analyst who wished to remain anonymous told Al Bawaba: “

“The fact that the MEK is highly visible abroad doesn't mean that they are popular within Iran - I've never seen compelling, credible evidence that they are regarded with anything but contempt.”

The Iranian-American Washington Post journalist Jason Rezian, who was himself jailed for over a year by the Islamic Republic, said that in seven years of living in Tehran, he never met an Iranian who supported the MEK.

“The Islamic Republic has effectively managed to annihilate all organized opposition to its rule. Whatever opposition manifests itself against the regime is spontaneous outburst of public anger and dissatisfaction. Concerning the NCRI/MEK, I have yet to see a meaningful manifestation of democratic practices within the organization before I believe in their democratic aspirations for Iran.

Based on their past record, NCRI/MEK rule over Iran is more likely to resemble the Khmer Rouge’s rule in Cambodia. I can’t measure the level of their popularity within Iran, but if their level of popularity among émigré Iranians is any guidance, they probably do not enjoy significant popular support within Iran.”

What is critical to note is that the MEK’s unsavoury reputation is common knowledge among Iran observers. Their foreign backers can only be aware that the majority of Iranians would never embrace the MEK as a “democratic” alternative. And this begs the question of why they are billing the group as such anyway. Perhaps they sincerely do think, against all evidence, that the MEK could be all that they claim. But if Bolton, Gingrich, their fellow travelers and the MEK’s financial backers do not really think that, then why are they presenting them as such?

The most plausible answer is that the MEK, rebranded as a “resistance council”, could help to legitimize a push for regime change, by at least appearing to fill a hole where the regime’s replacement should be. If so, it reaffirms concerns that those pushing for regime change in Tehran at any price have little or no regard for the consequences, or for what the Iranian people actually want.